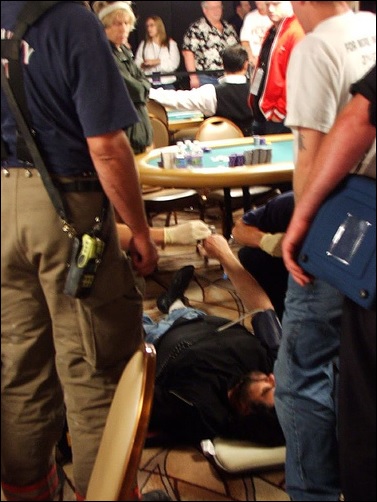 We’re no doctors but this doesn’t look so good.

* Editor’s Note: B-Sides posts are pictures that just missed the 20 Greatest Poker Pics of All Time cut. These pictures are heavier on the “story” side than the “capturing the moment” side. We’re including them as B-Sides because the stories are just too interesting and part of the poker fabric not to be mentioned.

A classic Vegas gambler, Clark epitomizes the old guard who just couldn’t keep up with the new breed of players.

The transitional shift was apparent during the 2007 WSOP. While the first mad rush of new players occurred in no-limit hold’em, those sharp math whizzes began learning and doing well in the stud games which old-timers like Clark still had a fighting chance. By 2007, guys like Clark (and T.J. Cloutier and others) simply couldn’t beat the games they once excelled at–the edge was evaporating.

So when Clark was in the midst of a deep run in the $1,500 Razz tournament (Event #29)–nothing short of death would keep him from playing.

Clark had a seizure. He was flopping on the ground like the fish at the end of Faith No More’s Epic. The area cleared. But that didn’t keep Dan from Pokerati from getting a shot of Clark on the ground. As Dan tells it:

I remember the official photogs (Eric H I believe and Joy Miller) were trying to keep everyone out of there, which led me to an argument with Joy about journalistic “rights” that had us not talking for two years. If I recall, I think I posted it to flickr because somehow I felt that gave me more “protection” as the fear of losing one’s credential was real back then!

When I showed it to a few people the buzz spread, and that’s when [Wicked Chops photographer] Gluten Free Charles told me I should get out of dodge. Apparently Gary Thompson or someone similar had come to the media room looking for me.

Who knows what they woulda said, but I took the mem card out of my camera and posted. No bad fallout. But when Miami John [Cernuto] had a similar collapse stopping play a couple years later, Tony the security guard came to me directly to make sure I wasn’t photographing the medical emergency. But fortunately he was too late, I already got the shot.
[What the Eskimo picture suggested] is a desperate man’s need to win.

Clark was a Vietnam vet–a medic–and maybe he was tougher than we thought and knew his body’s limits more than people gave him credit for. Or maybe Clark just really needed a good score. Whatever the case, seeing Clark on the ground, fighting off paramedics, and continuing to play is one of the saddest, baddest, depressing, inspiring things we’ve ever seen in poker.
And in case you’re wondering, here’s the best part of the story: CLARK FINISHED 4TH IN THE EVENT.