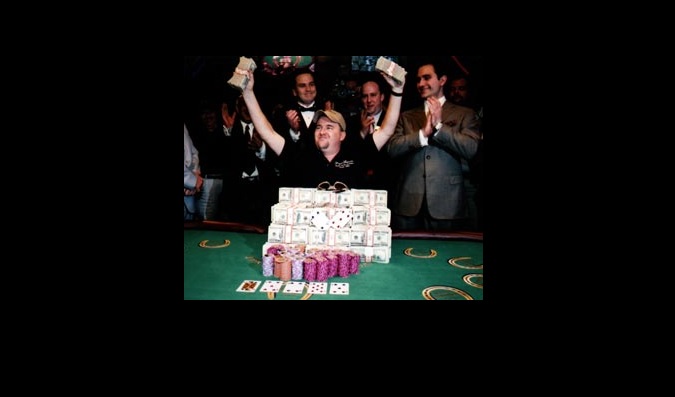 It all changed here.

If our #2 photo laid the foundation for the industry as we know it, our #1 photo built the house, the street, and the neighborhood.

There’s a Hollywood legend that says Talladega Nights got greenlit simply with the pitch: “Will Ferrell as a race car driver named Ricky Bobby.”

With that in mind, we imagine this Hollywood pitch would’ve had the exact opposite effect: Average working class accountant turns $39 into $2.5M by beating the best poker players in the world…on ESPN…and his name is Chris Moneymaker!

Seems unbelievable. But it happened.

An Everyday Joe accountant from Tennessee named Chris Moneymaker turned $39 into $2.5M by beating the best poker players in the world on ESPN. When this photo was taken, not Moneymaker, not really anyone, had an idea of the tidal wave that was about to engulf the industry. As Moneymaker told us:

I honestly was tired/in a state of shock so don’t really remember [the photo] well. I had zero idea I would help ignite a poker boom. I thought I would go back to normal everyday life.

Matt Maranz and his company, 441 Productions, were at Binion’s Horseshoe capturing this lighting in a bottle on tape. They too had little idea about the momentous occasion that just happened. At the time, it was just another “winner’s shot,” no different than Robert Varkonyi a year before him. Matt Maranz details the moment:

Looking at the photo now, it represents the definitive point of separation between before and after, the moment when everything changed. But rarely do you grasp the significance of something as it’s happening. When that photo was snapped around 3am before a few exhausted people in a dingy downtown Vegas ballroom, it’s just a picture of an accountant from Tennessee who won a pile of cash at a poker tournament. Nothing more. Nothing less. Moments later, Chris was gone, the poker staff started cleaning up, and we began tearing down our equipment. We all went to bed that night not realizing tomorrow was going to be very, very different.

But like when Nirvana dropped “Smells Like Teen Spirit,” it didn’t take long for the world to recognize, “Holy shit, this is different. And awesome.” Everything changed. It was seismic shift for the better.

Last year, ALL IN Magazine‘s Eric Raskin wrote an oral history of Moneymaker’s win for Grantland. Eric sums up the significance of the picture, and why the subsequent boom happened, very well:

The whole concept of the Moneymaker Effect is built around the notion that everyone sitting at home watching on TV–even people who hadn’t played a single hand of No-Limit Hold ‘Em yet–envisioned himself or herself duplicating what Moneymaker did. The Moneymaker victory photo captures the essence of that, as here’s an average guy, who came across at times during the tournament as an average poker player, and he started with $39, and he turned it into these fistfuls of cash, these life-changing bricks.

One of the great quotes in my oral history came from Dan Goldman, the PokerStars VP of marketing, remembering Chris’ interview session with the media immediately following the win. Goldman recalled how one of the reporters asked Chris if he’d ever won this kind of money before, and Chris held up one brick and said, ‘I’ve never made this much money in a year.’ That captures the whole fantasy–instead of riding a desk for 40 hours a week and needing 30 years of grinding to pay off your house, you can make a couple million in one week playing a game if the cards fall the right way. That’s what this picture represents. Millions of people gave poker a try to see if maybe they could be the guy holding up those bricks the next summer.

Our #1 Greatest Poker Pic of All Time captures the dream that propelled the industry forward. It wasn’t like any story that had been told before in poker. It was different. And it was awesome.

* Photo Credit: Eric Harkins of Image Masters. Image Masters has taken many amazing WSOP shots over the years. A cool side story Eric gave us about the era and the pic:

Up until 2005, all of our shooting Poker was ‘old school’ on film which had to be processed every night at a local Vegas lab. Negs would brought back to the hotel and scanned on one of our film scanners to send via Internet. Back then, the Associated Press and Getty didn’t feel it important enough to cover.  Jack Binion promised me in 1999 when he asked me to start covering the World Poker Open in Tunica that we’d be doing some amazing things if we were willing to carve out a niche in the poker world.  We broke that mold getting the AP to handle distribution of these Moneymaker images along with the story and it was picked up worldwide.  Things changed quickly!