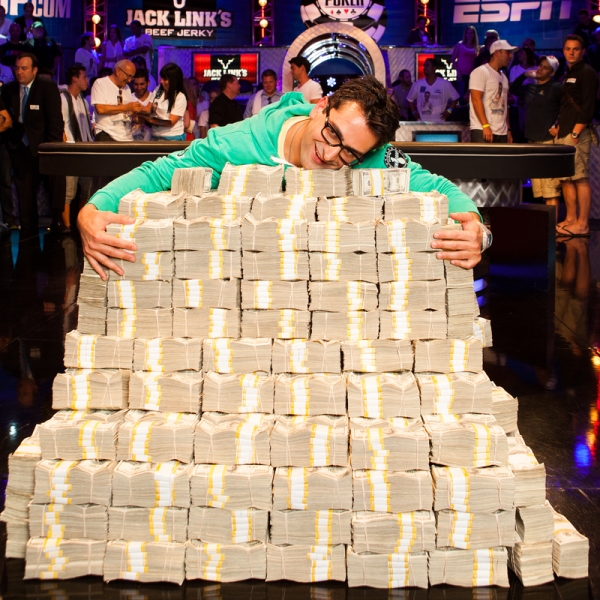 As long-time readers of WCP know, we love us some big buy-in tournaments.

And there was never any bigger than the WSOP’s $1M buy-in OneDrop in 2012.

The OneDrop brought in a still shocking 48 players–an impressive mix of high-stakes pros, businessmen, and Haralabos Voulgaris. The bracelet event awarded the top prize for a poker tournament ever** of over $18.3M.

The TV final table was almost a dream scenario, with a mix of top pros (Antonio Esfandiari, Phil Hellmuth, Sam Trickett) and business men (Bobby Baldwin, David Einhorn, and organizer Guy Laliberte). Esfandiari, a constant “top 5 most marketable” poker guy for the past decade, went into final table play as the big stick. As expected, he had a massive rail of supporters, including his personal hero, his dad. The Magician was masterful in final table play–taking it down and banking the $18.3M record prize. The victory made Antonio poker’s all-time live tournament money winner.

After the win, Antonio posed for this ridiculously awesome cash shot (taken by Neil Stoddard) which clocks in as the #10 Greatest Poker Pic of All Time.

As Antonio told us about the pic:

This was certainly the highlight moment of my career. Winning the bracelet for my father meant the world to me. The picture was mostly for shits and giggles. A good laugh. But winning all the money felt amazing. And even though I didn’t will the whole $18M for myself, it STILL felt just as good as if I actually HAD.

** Although very few of the players actually had anything close to 100% of themselves.