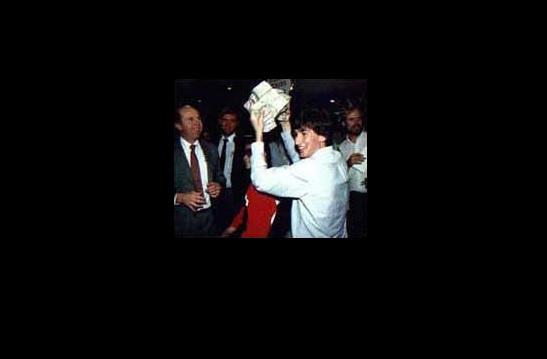 You can’t win 13 without winning the first one.

There was once a time when young 20-somethings didn’t win every poker tournament.

Poker was mostly dominated by an older crowd–grizzled vets who earned their stripes from years of grinding. In the early 80’s, Stu Ungar came and shook things up. But in 1989, Phil Hellmuth blew the doors off of “poker as we knew it.” He was bold, brash, and a very fresh face.

Poker had superstars before Hellmuth. Amarillo Slim was a regular on Carson. Doyle Brunson was already a legend. But there was nobody like Hellmuth.

On that moment, Hellmuth told us:

I told everyone that I ran into for months leading up to it, that I would win the 1989 WSOP Main Event.  I was 24 years old and I had played against all the great players, and by then I felt that I was the best no-limit hold’em player in the world.  I went so far as to fly my dad in to watch the whole four days. It was one of my written lifetime goals, and it was nice to enter the history books in the 1980’s when I was so young. Having my dad there (he hated the fact that I was a professional poker player) made it so much sweeter. I still recall the last card turning, my hands going up in the air, and then turning to see my dad running up the aisle to embrace me.

With Hellmuth’s win, for the first time poker looked young and fun. It was a way early sign of things to come.

Picture #11 comes on Monday…expect a “B-Side” this weekend.

** Editor’s Note 2: The photographer/owner of this photo are unknown. If you have an idea, please tell us or respond to the email sitting in your Inbox.