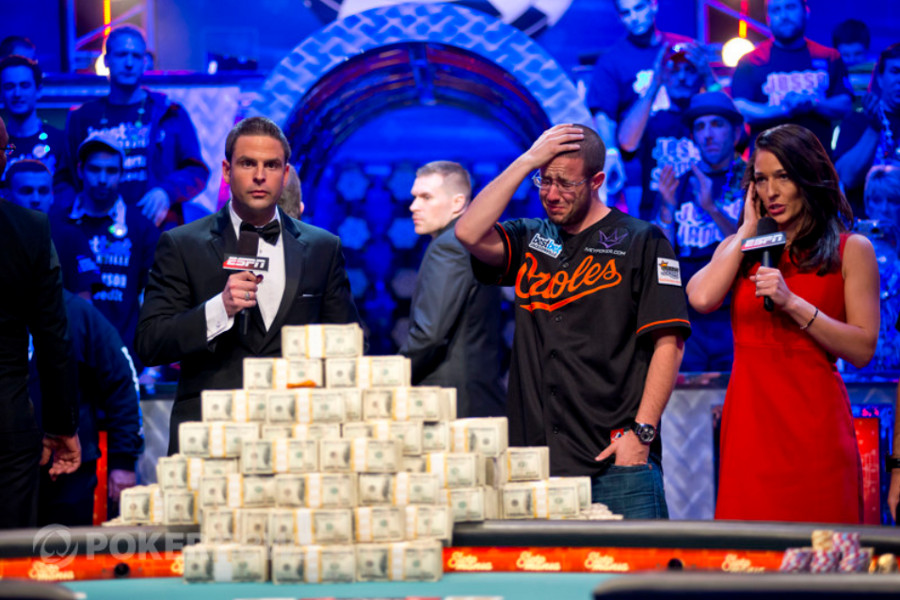 The moment meant more to Merson than most.

In the modern poker era, it’s very rare to see the emotional impact of victory on a player’s face. Not to be grumpy old men, but kids these days, for the most part, haven’t dealt with the adversity that some of their poker playing peers did. Suffice to say, Joe Cada didn’t face the same perils or struggles of a Doyle Brunson or even Phil Ivey.

But that wasn’t the case with Greg Merson.

Merson struggled with substances abuse (alcohol, marijuana, and cocaine) for years, even acknowledging at one point to being a “full-blown cokehead.” He went from being a straight-A student to pulling a 1.1 GPA. He entered Narcotics Anonymous, got clean, but eventually relapsed.

Merson then cleaned up again. He credited his friends, family, and poker as why he got–and stayed–sober.

In 2012, his focus and love for the game paid off. Greg Merson won the WSOP Main Event. And that’s when the touching #13 Greatest Poker Pic of All Time was taken (photo credit: Joe Giron Photography). It’s all there–Merson wears the struggle and joy on his face.

Greg will tell you that seeing his dad cry is what set him off but I think he’s underselling his own story a bit. The journey he had gone through that year from recovering addict to double bracelet winner and WSOP Player of the Year all become real in one moment on live TV. I still get goosebumps when I see that played on WSOP replays.

As Merson told Baltimore Magazine after the win:

When I won, I saw my dad crying and it was only the third time in my life I had seen that. So it hit me, and I just lost it.

Amber Gaming–the platform with a plan.