Home   20 Greatest Poker Pics of All Time – #14: The Ass Heard Around The Poker World 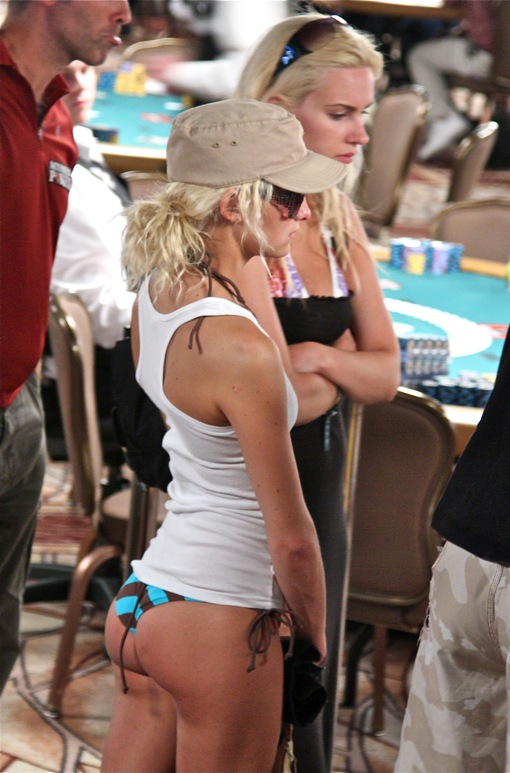 The shot that put the whole GOTR thing into hyperdrive.

As we’ve moved away from more breaking news stories, we’ve learned that people come to WCP for two reasons: girls and podcasts.

Our Girls on the Rail pictures have been picked up/linked to by mainstream entertainment sites, sports blogs, you name it. It got big. Huge. It’s probably the only reason Seth still gives us WSOP media credentials. So when the panel was talking through great poker shots, a GOTR had to be there–and that leads us to our #14 picture: Ass Girl.

Creator of GOTR, Entity Colin, on how GOTR started in 2008:

I remember taking the first ever Girl on the Rail shot [here]. I took it from the media row…was just scanning around to see what pros were playing, etc. Saw the hot girl behind [Neil] Channing and [Tom] McEvoy and snapped a shot with them partially in it but the focus on the girl. The simple “players name (photo above)” recap with photo where the player is blurred out and girl is the focus became a fun formula for doing daily recaps. Then it just took off.

By 2009, we were averaging 12,000-15,000 uniques daily during the WSOP, much off of GOTR galleries. And the one shot that really catapulted the GOTR phenomenon to the next level–Ass Girl, or otherwise known by her real name, Kim–happened early during the 2009 WSOP.
As WCP photographer and “4th Entity” Gluten-Free Charles tells it:

I was along media row and when I turned the corner and I saw Kim removing her skirt and just standing there watching the play at that corner table in the back. I knew my “job,” so I grabbed the camera and surreptitiously went about taking the shots, which is why they are partially blurry. To be fair, the 20 hour days could’ve melted my mind but, either way, the picture exists and is still one of the greatest GOTR shots we’ve ever posted.

And for the first time ever, here’s Kim’s take on how the shot happened:

I was lounging at the pool all day with my best friend, Jacqueline Boulerice, and her husband, Jesse Boulerice.  They are friends with [2007 WSOP final table-ist] Lee Childs, so when we left the pool, they wanted to stop in a say “hi” to him while he was playing cards.  I put my skirt on before going in the casino but my bikini was wet from the pool so I just took it off while walking to the WSOP.  We watched Lee for five minutes, then left.  After I returned home from Vegas, Lee Childs had emailed the article of my ass to Jesse & Jacqueline.  I got a kick out of it and fessed up on the site.

Kim went on to become a finalist for a HPT hostess content, but hasn’t really been around the WSOP-scene since. Regardless, when people think GOTR, this is the shot they most often reference.