Home   20 Greatest Poker Pics of All Time – #17: Poker Hits the Big Stage and All Grows Up 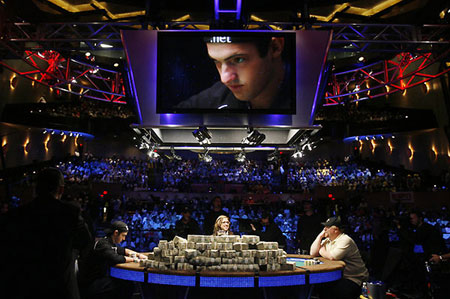 It’s getting hard to remember a time when the WSOP Main Event didn’t conclude with the November NineTM.

Back when a lot of us first started covering poker, the WSOP Main Event rolled on from start to finish with no final table break. You made the final table at 2am one night. You picked right back up late afternoon the next day. The world did not have a three month break to learn what made Dan Nassif tick or what music Rhett Butler listened to while folding over and over and over again.

After the Jerry Yang thud of a final table in 2007, “the powers that be” decided a change was needed to build up the awareness and prestige of the WSOP Main Event. The November Nine was born.

The TV final table was also moved out of the Amazon Room at the Rio (where the Main Event was solely the previous two years) and into the Penn & Teller theater.

While 2008 was a successful first run at the November Nine, things really blew up in 2009.

The final table had it all: from outspoken and interesting personalities like Jeff Shulman who vowed to us that he’d throw the bracelet in the trash if he won it; to whatever the exact opposite of outspoken and interesting is with Eric Buchman. You had the greatest poker player in the world, Phil Ivey, and you had an amateur ginger logger from Maryland holding his own and secretly out-smarting everyone in Darvin Moon.

Then you had Joe Cada gunning to become the youngest WSOP champ of all-time. Which set the stage for this amazing shot.

As Ty Stewart told us:

This was the second year of the November Nine concept, and evidence of just how big it had become for poker. 1500 people looking on, a massive production on ESPN – in a signature Vegas showroom. Huge bricks of cash. The big time.

Poker hit the big stage. Our little baby had all grows up.

This weekend we’ll take a break from the actual countdown but post some “B-Sides,” pics that didn’t make the cut but still have amazing stories. #16 picks back up on Monday.