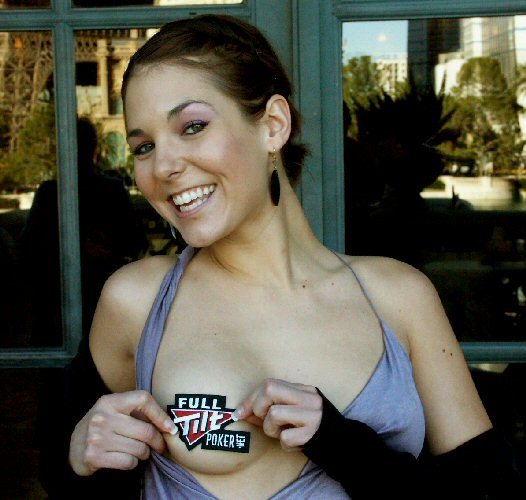 This was a tough one to decide including, but it made everyone’s list. And it certainly made an impact.

That was, in part, because we still had interesting characters. Few of which at the time were math whizzes. And even fewer of which had breasts. So when you get an interesting non-math whiz with breasts, you get a story.

Our #19 Poker Pic of All Time set the festering TMZ’ing of poker into hyperdrive: it’s the Brandi Hawbaker Full Tilt breast shot.

The Hawbaker pic was taken during her coming out party at the WPT Festa al Lago in 2006, where she cashed twice for over $30k. This was a period when poker sites were basically giving out sponsorships at McCarren International Airport. Jordan Freaking Morgan had a Tilt deal. So did Brandon Adams. It didn’t take much.

So to get Full Tilt’s attention, Hawbaker slapped a patch on her breast and snapped away. A sensation was made overnight. Had poker adopted Twitter back then, Hawbaker would’ve beaten Ashton Kutcher to 1M followers. She would’ve shut down the site.

There were rumors that Hawbaker was paid $100,000 for the shot (not true, as even the Bitars weren’t that stupid…actually…wait…but it still wasn’t true).

Ultimately, Hawbaker did not land a Full Tilt deal.

What she did land off of this picture was a crazy amount of media coverage. Brandi did for WCP, Neverwin, and other sites what Britney and Paris Hilton did for TMZ at the time. She was everywhere in poker blogs and forums.

Unfortunately, the story didn’t end well. In April 2008, she committed suicide (a story a reader of ours broke on WCP and was later confirmed by Neverwin). A lot of the hot air went out of the poker community balloon after that. Howard Lederer even commented to an associate at the time that, “There goes all of [WCP’s] traffic.” The drama-bombs that dominated poker news coverage at the time began to slowly dissipate.

Despite the truly tragic outcome, the Hawbaker picture made a huge impact at the time. It ushered in a golden era of poker journalism when things were lighten, looser, sexier, and a helleva lot more fun.