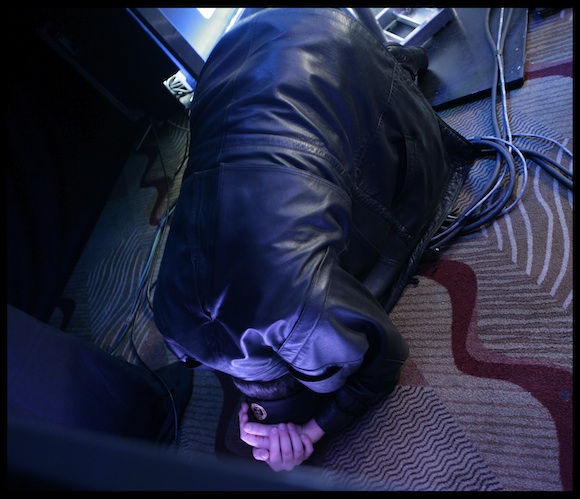 The Poker Brat collapsing kicks off our 20 Greatest Poker Pics of All Time.

The Bay 101 Shooting Star has always been a favorite stop among players for the World Poker Tour.

Season VIII’s WPT Bay 101 final table had the potential to be a classic, as all six players had some level of notoriety.

None were more notable than Phil Hellmuth.

Hellmuth got off to a rough start, losing some of his stack early in play. He was in position to rebound back to the top of the leaderboard though after moving all in holding pocket Queens. He was called by Andy Seth, who held A-J.

As Hellmuth tells us, here’s how the above pic came to be:

I had played great poker for 5 days to make it to the WPT Final Table in my hometown… I played too fast for a minute, lost some chips back, and the next thing you know I’m all in for second place in chips with my Q-Q vs  [Andy Seth’s] A-J.  K-6-2-10, then BAM, an Ace hits and I’m staring in disbelief at the table (and my opponent is equally shocked!).  I gather my wits long enough to quickly shake everyone’s hand, and then it hits me that I’m out and I collapse off stage away from the cameras…Or so I thought…

The WPT’s recap explains how surreal it all was:

After the river fell, Hellmuth sat in stunned silence before shaking hands, then dropped to his knees, overwhelmed by the emotion of the situation. As he lay curled up on the floor, the players and audience watched unaware of how to proceed. Eventually, Hellmuth composed himself enough to make a graceful exit, even stopping to sign some autographs before heading home.

This will not be Phil Hellmuth’s only appearance on the 20 Greatest Poker Pics list. Look for him again in a week.