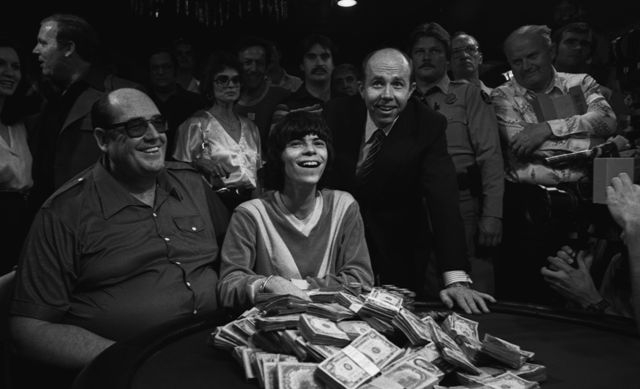 Three of the greatest ever…

We love this picture.

In 1980, Stu Ungar had the world on a string. He was like a 2000’s Internet whiz kid transported back in time to do battle against the oldest of old school Vegas vets. Ungar was brash, aggressive, diminutive, charismatic…and ridiculously talented at poker.

“Stuey” was an out-of-nowhere tornado on the poker scene. He was the son of a Manhattan bookie. He was a high school drop out. He was the world’s best gin rummy player. Bankrolled by the Genovese crime family, he became the best poker player–with the best ability to read people–possibly ever. When Ungar first showed up in Vegas, from 1980 to 1983, he finished 2nd, 1st, 1st, 1st, 2nd, and 1st in the WSOP events he cashed. Ungar was all or nothing in life and in poker.

That leads us to our #4 Greatest Poker Pic of All Time–Stu Ungar (with Doyle Brunson and Jack Binion) grinning after winning the 1980 WSOP Main Event.

As Doyle Brunson told us:

Stu Unger beat me head up for his 1st WSOP victory (lucky little bastard:-). The great Irish bookmaker, Terry Rogers (upper right) and Roger Moore, Poker Hall Of Famer (on the left) were also in the picture.

What we really love about the shot is how the future looks limitless for its three legends in the making, Doyle, Stu, and Jack. And there’s no one better to describe the moment than Ungar biographer and resident WSOP laureate Nolan Dalla:

This iconic 1980 photograph shows poker at the crossroads, and is its Mount Rushmore moment.  Three legends, three colleagues, three closest of friends — three convergent interests intersecting at a pivotal moment in poker history at Binion’s Horseshoe when Las Vegas was still a gambler’s playground paradise and all things still seemed possible.  It was a time when life seemed simpler, when the world was lived to the fullest by a motley medley of larger-than-life characters, captured for posterity in worn-out frames of black and white.  Even with his second-place finish in the Main Event that year, the aftermath shown here, two-time world champion Doyle Brunson remained very much “the king,” while WSOP founder Jack Binion ruled the poker universe.  And those golden times of clarity and certainty were about to change, about to become far less clear and less certain in a very big way once Stu Ungar invaded the poker scene and torched the felt with unprecedented gravitas, as this moment of victory shows.  Now, take a closer look.  Catch the glimmer in each of their eyes revealing a childlike innocence.  No one of the three wanted to grow up.  No one wanted this moment to end.  But it would end all the same.  All glory is fleeting.  Years later, Jack departed the WSOP following a family dispute.  Stuey’s inner demons emerged and he turned down a darker path of self-destruction.  Meanwhile, Doyle somehow managed to endure it all, and then some.  After this photo was taken, nothing would quite ever be the same again.  Not for these icons.  Not for the game.

As Dalla mentions, all did not end well for Stuey. Ungar fought some major demons. He dropped out of the WSOP scene after 1991. He then re-emerged in 1997, his nose caved in from years of cocaine abuse, and dominated the Main Event, improbably winning the title and $1M. It was Ungar’s record third WSOP Main Event title–something that will likely never be matched. For one week in 1997, Ungar conquered his demons and was back on top.

But Stu Ungar was never more alive than he was in this picture.

For more on Ungar’s life, buy Dalla’s One of a Kind bio here.

* Photo credit: University of Nevada at Las Vegas Special Collections on the World Series of Poker