Home   20 Greatest Poker Pics of All Time – #5: The Perfect Way to Cap Off the Perfect Year 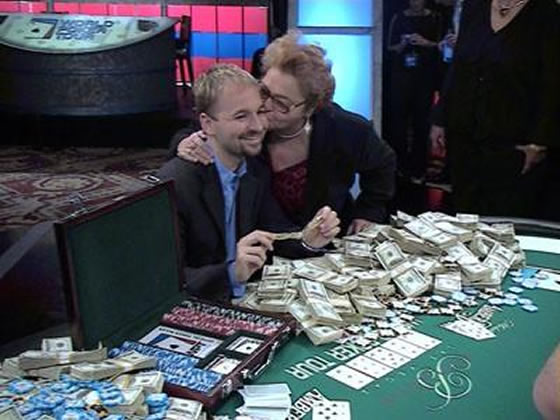 There’s a pretty good chance that if BLUFF or the GPI existed a decade ago, Daniel Negreanu would’ve ended 2004 like he did 2013–as both ranking system’s Player of the Year.**

Before the WSOP held (approximately) 147 bracelets events every year, or before the EPT, HPT, MSPT, or DSPT existed, there were still a finite amount of major events a year. Negreanu cashed in 15 of them, including six WPT and six WSOP events. He made 4 WPT final tables. He made 5 WSOP final tables. He won one bracelet. He won two WPT titles.

It was that last one–the WPT Five Diamond Poker Classic–that capped off Negreanu’s incredible 2004 and produced our #5 Greatest Poker Pic of All Time.

The final table was stacked and included long-time Negreanu friend Jennifer Harman and future PokerStars endorser Humberto Brenes. Negreanu entered the final table as the massive chip leader, and held on for the title and  $1,770,218.

After the win, his mom came down to kiss the winner. As Negreanu told us:

I’ve always been a momma’s boy at heart and on one has ever been more proud of me than her. She knew nothing about poker, but that didn’t matter. Having her there was very special to me.

** There’s an equally good chance that if selfies existed, Alex Dreyfus would’ve taken 4,987 of them in 2004 as well.