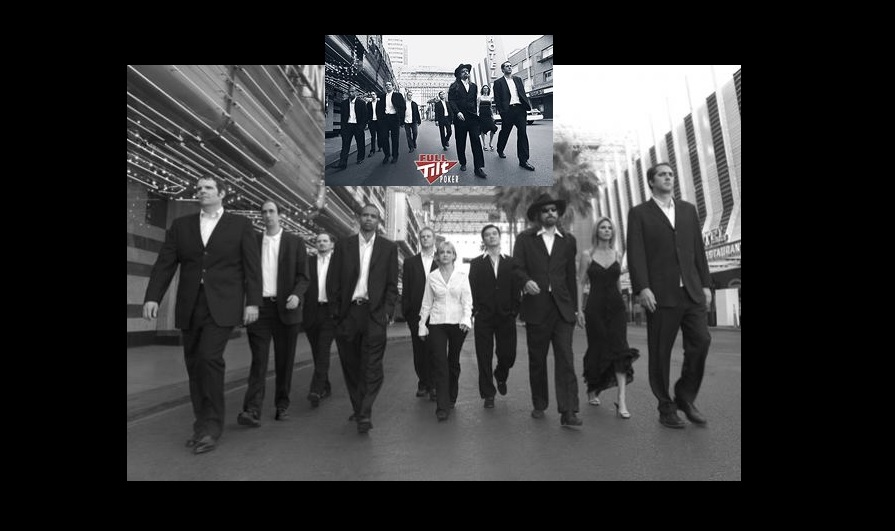 Poker’s early advertising efforts were pretty unsophisticated. The spots were almost all the same, focusing on bad poker faces, hot girls, or whatever the hell this is.*

By 2004-2005, poker was at its “this is cool/sexy” peak. Full Tilt was the first company that captured this cultural zeitgeist in their advertising. Executed by the highly respected Bob Wolf & TPG and primarily produced by Ben Weiner of the Wong Doody agency (real names, not kidding), the original Full Tilt ads made poker pros look like the rock stars they had suddenly and legitimately become.

This was an amazing feat–because most of the Team Full Tilt people had been anything but cool. They were kind of lifelong nerds. Until now.

The original Full Tilt ad also brought credibility to the industry–it looked and felt like it came from the sharpest minds in advertising. It raised the bar. That’s why “Reservoir Dogs on Fremont Street” clocks in at #9 on our Greatest Poker Pics of All Time list.

A Tilt insider close to the ad campaign recalled how the campaign came to be:

The [campaign] was the brainchild of Chris [Ferguson] and Ray [Bitar].The way it came about is they had an idea–let’s say you had a choice to be a member of two golf clubs. Both had the same par 5’s, par 4’s and par 3’s, and they had the same greenskeeper, and they were just basically the same. But one said that you could join at 3pm and John Daly would teach you to drive, and Tiger [Woods] on Saturday would give you putting lesson. Well, which would you join? Clearly you’d join the one where you got these once in a lifetime experiences.

It was a great thought, but there were two barriers. First, would people believe it? And second, would you actually want to play against the pros? And the answer, especially in the early days, was “yes.” We made people believe it via the avatars—and via their chat–and it was in [the pro’s] contract that they had to. They really did play.

As far as the ad, Resevoir Dogs was the theme for which this was taken.The people on the team was a great poker player in the own right. And these guys were cool at the time.

We purposely—you’ll notice there was never a picture—we purposely never named the people in the picture. We felt like if you didn’t know who they were, it didn’t matter. You’ll find out or you’ll want to know. Also, if you put up a picture of Michael Jordan and put next to it “Michael Jordan, World Champion,” it’s degrading. You should know who Michael Jordan is. We treated pros the same way.

The shot, Reservoir Dogs on Fremont Street, we did as old school Vegas, black and white, and it set the tone, made them cool, and made people want to play them.

* This commercial was Annie Duke’s idea…and not a good decision.