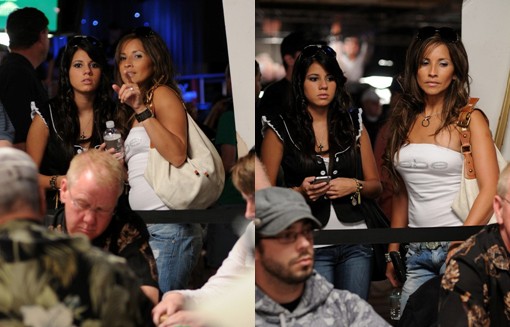 So this (likely) mother-daughter combo might've been on to us. But that's OK. Because they're twice the Girls on the Rail fun. Also twice the fun? Having double the chips as anyone else, like big stack Troy Weber (not pictured).

Listen, poker tournaments aren’t won on the first day. Except for the ones that are only one day long.

But as we’ve seen over the years, often times day one WSOP Main Event chip leaders don’t even make the money. However, it certainly doesn’t hurt to have chips. And after Day 1D, Troy Weber has about twice as many as anyone else, stacked at 353,000.

Weber has some small cashes in circuit events, but nothing on this big of a stage to date.

Plenty of big names among the Day 1D chip leaders. Carter ‘ckingusc’ King, the guy charged with marijuana possession around the Michael Phelps bong incident, has 170,000. Josh Arieh (136,500), Dutch Boyd (135,000), Prahlad Friedman (130,000), and Jon Kalmar (130,000) all made triumphant returns to the mainstream poker consciousness ending the day among the big stacks.

Also advancing to Day 2B is FOWCP Dee Dozier (here, here and here), who is making her first return to the Main Event since 2007 and got off to a pretty good start with 51,500 in chips.