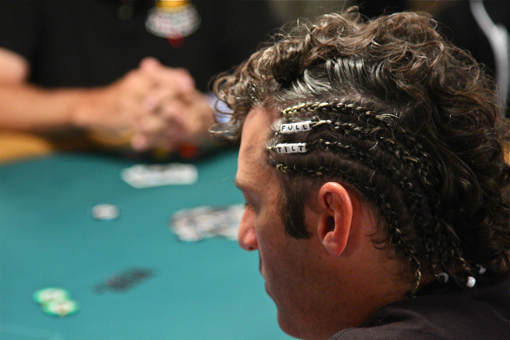 Talk about shameless promotion for an online site that buys you into the Main Event. Speaking of which, we'd seriously tattoo your company's name, your name, or your first dog's name on our penis for a Main Event buy-in. You bet your ass we'd sell out.

The 2009 WSOP Main Event is into it’s second level on Day 1A. Pre-registration numbers last night were just below 4,000. So it looks like 5,000 entrants when all is said and done is a lock at least. Given The EconomyTM, the death of Michael Jackson, the swine flu, and a host of other factors that would keep somebody from playing this year, it could be worse.

The featured table is pretty stacked right now too, as it includes Allen Cunningham, Eli Elezra, and Lex Veldhuis.

For a more complete and possibly fuller list, go here.