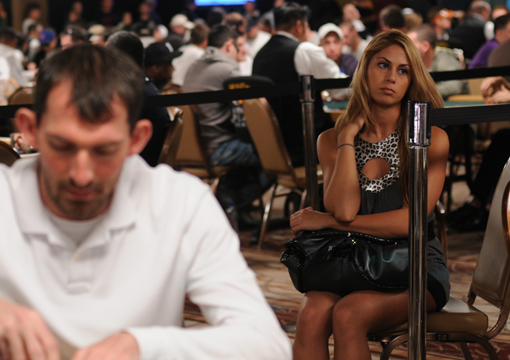 To those of you saying this weekend has been slim picking for Girls on the Rail, we hear ya.

Another stacked weekend of tourneys. Phil Ivey winning his seventh bracelet in Event #25 (and second of the 2009 WSOP) was the big story, but there was plenty of other action to follow. For the sake of the poker economy, let’s hope the Lakers pull out the NBA title tonight.

Event #28 ($1,500 NLH): A field of 2,638 played down to around 300ish. Ways to go. Some notables include but are certainly not limited to Ivan Demidov (view his first Russian vlog on WCP RU here), Liv Boeree, a woman, and Kelly Kim, not a woman. Get full chip counts here.

Watch Evy Ng and Lex Veldhuis Advance to Round Two of the 10K Heads Up on RawVegas.tv