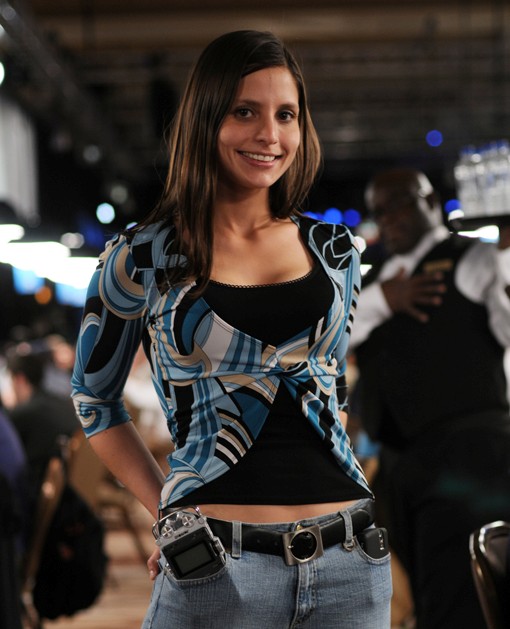 Hey Lizzy, is that a digital voice recorder in your pocket or are you just happy to see us? And what is Rhynie Campbell doing in the background in a dealer outfit?

While Phil Ivey capturing his sixth WSOP bracelet was definitely the story of the day, there was plenty of other action going on in the Rio Amazon Room. Here’s the round-up:

:: Event #7 ($1,500 NLH): Travis Johnson defeated a friends and familyTM final table (and a total field of 2,791) to capture his first bracelet and $666,853. Johnson defeated Steven Karp (not this one though) heads-up for the title. Get full results here.

:: Event #9 ($1,500 NLH Six-Handed): This one is shaping up to be another friends and family final table. Play was stopped at 3am PT with 8 remaining. They’ll come back today at 1pm PT to lose two, then play out the final table. Charles Furey currently leads with 1,690,000. Praz Bansi is the only bracelet winner in the field, having captured one of those lame $1,000 buy-in events played after the Main Event started back in 2006. Full chip counts here.

:: Event #11 ($2,000 NLH): Man there were a lot of events going on yesterday. This one had 1,646 entrants with 232 making it to Day 2. Scott Hall is the overnight chip leader with 144,000. Phil Hellmuth and T.J. Cloutier still remain. Also alive is UFC ring announcer Bruce Buffer, who is putting the ladies aside for a bit to concentrate on winning his first bracelet. Watch his WSOP vlog here.

:: Event #12 ($10,000 World Championship Mixed Event): An impressive 194 person field ponied up $10k for the most diverse tourney in this year’s WSOP, consisting of eight different poker variants. After busting out (in the money) of the PLH/PLO event, Daniel Negreanu swung over to this one and quickly built up to big stack. Negreanu ended Day 1 as chip leader with 120,000. Plenty of big names among the 126 remaining, including Justin Bonomo, who vlogs about it in the below vid. Get full chip counts here.