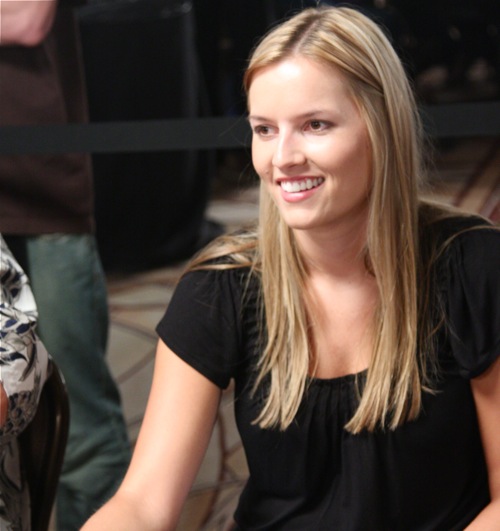 This girl single-handedly prettied up the massive field today in the $1k Stimulus Special Event.

:: Event No. 2 ($40k Special 40th Anniversary) – The big story here is Greg Raymer making a run at this showcase event celebrating the WSOP’s 40th anniversary. The tournament drew every big name and big bankroll in poker, and no doubt Raymer is really, really hungry . . . to have this title alongside his 2004 WSOP Main Event win. Down to the final four players, Raymer currently leads with 8,880,00 in chips. Just behind with 8,025,000 is Vitaly Lunkin, who is hoping to make a case for this to be The Year of the RussianTM. Young Internet ace Dani ‘Ansky’ Stern is stacked third with 4,755,00 and cleaned-up Isaac Haxton is fourth with 4,000,500. Gone from the final table are Ted Forrest (9th), Noah Schwartz (8th), Evy Ng‘s boyfriend Lex ‘RaSZI’ Veldhuis (7th), Alec Torelli (6th) and Justin Bonomo (5th).

Follow today’s action here. One more pic of pretty below. 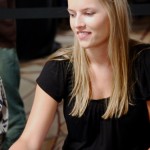