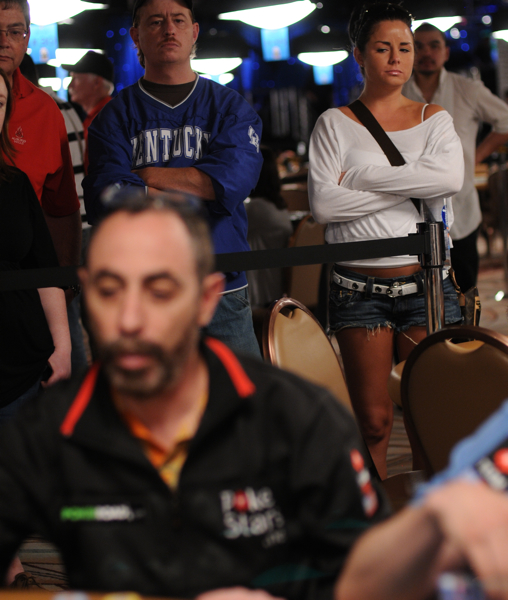 Twitter's @BarryGreenstein is the current chipleader in Event No. 47 at the 2009 WSOP.

If Jeffrey Lisandro winning his third bracelet of the 2009 WSOP didn’t all but seal the deal–and it all but did–for Team SteindroTM in their POY points prop bet against Daniel Negreanu and Erick Lindgren, Team SteindroTM‘s other half, Barry Greenstein, is looking to do so today in Event #47 ($2,500 Mixed Holdem) where he leads the final 16 players with 510,000 in chips.

Greenstein is guaranteed to boost his series total to at least 85 POY points after this event, and a win here would put him in a points tie with Negreanu (165). And with less than ten events remaining and Lindgren only earning 30 points so far and Lisandro way out ahead with 355, there’s really not much hope for Team LindgreanuTM.

Get chip counts here. Girl on the rail along with the creepy Hevad Kahn and Bahador Ahmadi below.