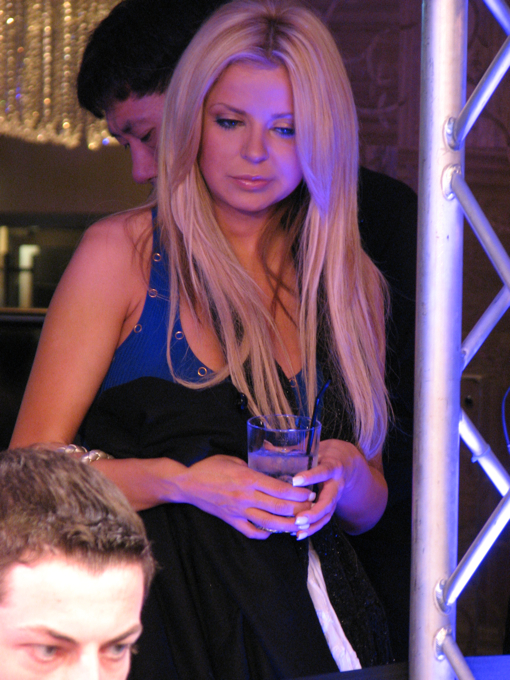 Tom 'durrrr' Dwan (right foreground) is sweated by his if-Tara-Reid-didn't-do-tons-of-drugs-this-is-what-she'd-maybe-look-like-now girlfriend at Event #3 of the 2009 WSOPE.

Some quick updates from the 2009 WSOP Europe:

:: As we wrote earlier, Erik Cajelais won Event #2 (£2,500 Pot Limit Hold’em/Omaha), banking £104,677. Men “The Master” Nguyen finished fourth. Go to PokerListings here for an interview with The Master where he denies all of the cheating and chip dumping allegations from his past. Don’t know if we’ve seen him talk about that one before.

:: Tom ‘durrrr’ Dwan is looking to clear forum rumors about his sexuality capture his first bracelet by bringing his hot-ass girlfriend to sweat him winning Event #3 (£5,000 Pot Limit Omaha). With 26 of the initial 154 starting field remaining, durrrr holds the chip lead. Other big named big stacks include Howard Lederer, Sandra Naujoks (a woman), Robert Williamson III, and Barry Greenstein. Get full reporting here (click the Live Reporting link). Side note: durrrr’s chick has a hot friend with her too…we’ll use her pic for a future update post.

:: And according to this tweet, it looks like Phil Hellmuth gets to make his grand Caesar entrance to the WSOPE Main Event too.

UPDATE: durrrr is crippled. Not like, Jimmy Vulmer crippled, but he lost a big pot after flopping top set. Will probably go out in 14th place after dinner break. Related, Jimmy Vulmer at his best here.