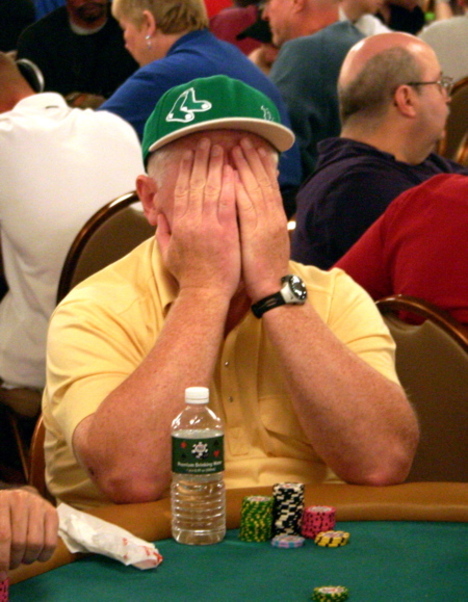 What Dan Harrington's reaction probably looked like upon hearing he was elected into the Poker Hall of Fame.

The Poker Hall of Fame has two new members.

It was announced today that Dan Harrington and Erik Seidel will be inducted into the 2010 class.

Not much surprise here. Many felt that Harrington should’ve been elected last year. He won the WSOP Main Event in 1995 and made consecutive final tables in ’03 and ’04. Harrington has two WSOP bracelets, one World Poker Tour title, and over $6.5M in career tourney earnings. Adding to his credentials, his Harrington on Hold’em books helped thousands of new players in advanced tournament strategy during the first poker boom. He’s rumored to have sold around $20M in hold’em books.

Erik Seidel has 8 bracelets, one WPT title, and has seconds in the WSOP ME, Aussie Millions, and NBC National Heads-Up. Seidel has cleared over $10M in career tournament earnings, and he pwns twitter.

“I’m very honored to be elected to the Poker Hall of Fame this year and it’s an extra bonus for me to be going in with Dan Harrington…We have played together and have been great friends for my entire poker career. Both of us refined our games at the Mayfair Club in New York.  I have such a high regard for the many members of the Poker Hall of Fame that I have played with over the years and it’s a real privilege to be able to join them.”

Not making the cut this year were Scotty Nguyen (WSOP Main Event crown, $50K Player’s Championship winner, WPT title, almost $11M in earnings) and Phil Ivey (same credentials as Seidel, but with about $3M more in earnings plus an unreal cash game record).