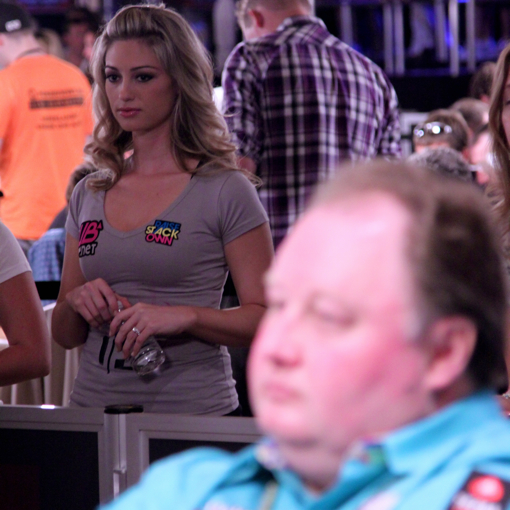 Greg Raymer wasn't as focused as he usually is, busting out of the Main Event during level 1 today.

We’re nearing the end of level 2 of Day 1A at the 2010 WSOP Main Event, and the biggest news so far is Greg Raymer has been eliminated. The 2004 WSOP Main Event champ continued his bad run at the series this year (one cash?), hitting the rail mid way through the first level. In related big news, but in no way as big as Raymer, Lacey Jones, a woman, is stacked nicely with 60,000 in chips, making her among the early chipleaders. Here’s to hoping our WCP Hottest Girl In Poker can go deep this year in the Main Event. Come to think of it we can’t think of anything better than Lacey going deep.

Also among the  leaders early on is Michael “The Grinder’ Mizrachi, Issac Haxton and the amazing hair of Vince Van Patten. Among the early notable busts include 2008 November NinerTM David “Chino” Rheems, Victor Ramdin and Nick Schulman.

Photos from today below including some of the aforementioned people, a few cute girls at the table and early Girls on the Rail …

Full Gallery: Photos from Day 1A at the 2010 WSOP Main Event