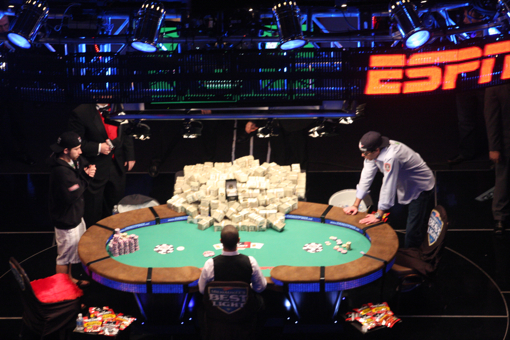 Why don't more people care about someone winning $8.9M?

While this year’s WSOP Main Event final table certainly lacked the draw of 2009 (with the dominant Phil Ivey and Darvin Moon storylines) or 2008 (first year of the November Nine concept plus when Dennis Phillips captured the first of his back-to-back WSOP ME titles), we didn’t think it lacked that much appeal.

For comparison’s sake, Millionaire Matchmaker with Beth Shak (which aired an hour earlier on Bravo) scored 1.37 million viewers and a .8 among A18-49. In related news, that voice you hear right now is Beth Shak calling Mori Eskandani saying, “Mooorrrriii, put me on Poker After Dark I’m a draw, Morrrri…”

If we’re reading this right, then this year’s final table drew less households than the epic Jerry Yang 2007 broadcast.

In fairness, the ratings still ranked 9th overall for the night on cable, and 8th in the coveted Adult 18-49 demo. It’s also possible ratings dropped in part due to the ESPN3 live stream. And year-to-year comparables will be somewhat off as the broadcast aired an hour later (10pm ET) this year.

Regardless, down is bad and up is good. We’ll wait for the final Neilsen ratings to come out for final analysis, but get a quick look at the overnights from TV By the Numbers here.

So what can be done to fix this downward trend? Is the drop just because there was no “everyman” to root for like Dennis Phillips and Darvin Moon? Or does it go much deeper than that? Look for our thoughts later today…