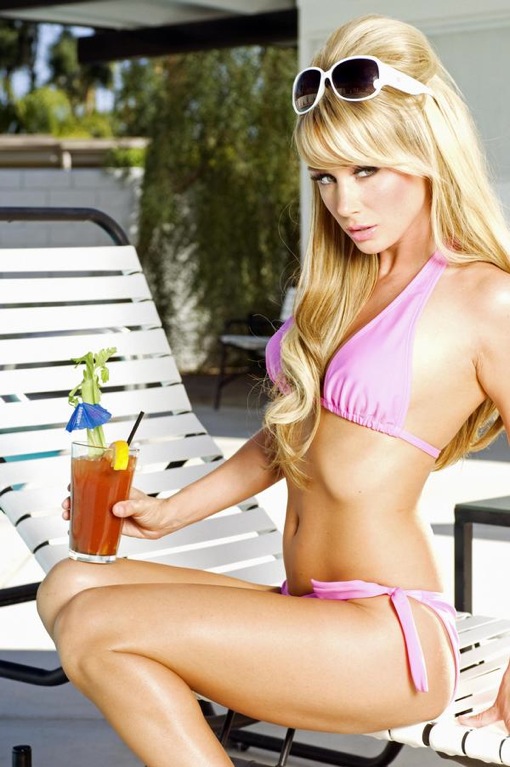 The 2010 WSOP is supposed to be the Year of the Woman, which hopefully means we'll be seeing plenty of Sara Underwood.

(Editor’s Note: The 2010 WSOP is only a few weeks away. So time to start regularly posting about it. Most of the following post appears in this month’s issue of Bluff Magazine. For the full article, go to your newstands and buy a copy. For 75% of the article, read the below post.).

It’s time for the World Series of Poker.

While most members of the so-called poker “media” get burnt out on the whole WSOP experience each year, we relish it like we relish relish on a hot dog.

Despite a different new poker tour popping up seemingly overnight, the WSOP still matters more than every other event, combined, and times 10.

Faraz Jaka is just won WPT Player of the Year. Who? Exactly.

Ok, now name us the past five WSOP Main Event champs. That’s what we thought. You could probably name the past five runner-ups too if we spotted you Tuan Lam.

Think Tiffany Michelle and Maria Ho would be on The Amazing Race if it wasn’t for the WSOP? Phil Hellmuth wouldn’t be on beer cans either.

You get the point.

So with that out of the way, here’s our 2010 WSOP preview: who to watch, where to stay, where to eat, what to look for, and other assorted goodness for the best six weeks of the year.

Players to Watch. Each year, a Brock Parker or Tom Schneider pops up and wins a couple of bracelets almost out of nowhere. This year, there are few guys who seemed poised to make “the leap” into the broader poker consciousness. Look out for these names this summer: Howard Lederer (our official pick to win something major this year), Dwyte Pilgrim, Brian Devonshire, Scott Seiver, and David “The Maven” Chicotsky. That’s right, The Maven. NEVER underestimate The Maven. Ever.

[ONLINE ONLY EDIT: This article was written before it was determined that 2010 would be the Year of the WomanTM. So basically watch for anyone with a female name this year to dominate, and that includes Shannon Shorr.]

Players Not to Watch. Each year, people expect big things from certain established or on-the-rise pros and for whatever reason (not focused, drugs, they were never really good to begin with, they’ve made so much money off a certain site that they just don’t care anymore, not their year, just running bad, or they’re French), they just can’t bring home the bacon. This year, don’t even bother paying attention to: Allen Cunningham, Bertrand ‘ElkY’ Grospellier, John Phan, Darvin Moon, and Antoine Saout.

Sites to Follow. Of course, you’ll always get your needed fix at bluffmagazine.com or worldseriesofpoker.com, but make sure to bookmark the following sites for additional coverage: ESPN Poker, pokerati.com, taopoker.blogspot.com, benjodimeo.blogspot.com, and rawvegas.tv.

Who to Follow on Twitter. Almost every major pro is tweeting these days, but if you’re looking for special insights and atmosphere at the WSOP, be sure to follow Daniel Negreanu (@RealKidPoker), Phil Hellmuth (@phil_hellmuth), Erik Seidel (@Erik_Seidel), Dr. Pauly (@taopauly), and Brian Balsbaugh (@balsbaugh).

Where To Eat (Inside the Rio Version): Ok, so enough about following the action from home. Let’s assume you’re one of the 50,000-60,000 people who will actually play an event. Where should you eat if you elect to bypass player’s cafeteria? For years, we were all about the Sao Paulo Cafe. For some reason though, inexplicably last year they decided to shut down the Sao Paulo during lunch hours. This frequently denied us the best potato skins and walnut-blue-cheese-chicken salad in town. Fortunately, the Rio still has some other decent options. We’re actually big fans of the Sports Deli. Lots of options to choose from there, all more or less reasonably priced (for Vegas). If you have the time for a longer dinner followed by a quick trip to the can, hit Gaylord’s. Some of the best Indian food in town. For over-priced but still good and unique Italian, there’s Martorano’s. We’ve heard repeatedly that the Village Seafood Buffet is one of the best in town. And Hamada’s Asiana isn’t terrible if you’re like Barry Greenstein and are in the mood for more Oriental fare.

Where To Eat (Outside the Rio Version): We’ll break this down by meals of the day. For breakfast, we’ve been all about The Coffee Shop at Treasure Island for years. Our personal favorite breakfast in all of Vegas. For lunch, the Palm Restaurant in the Forum Shops at Caesars Palace has a really solid lunch menu at a good value. And for dinner, we’re all about the cow. Craftsteak at the MGM Grand is a long-time favorite of ours. If you have deep pockets, Carnevino will definitely be one of the best meals you’ll ever have…although it’s still ridiculously over-priced.

Where to Stay. If you’re not booking a room at the Rio for the WSOP, there are a few good options. If you plan to grind away at a bunch of events and are on a budget, stay at the Gold Coast next to the Rio. Not the nicest place in the world but the rooms are cheap. For a step up, we always recommend the Flamingo. Room rates are always reasonable, location is great, and you’re a very short cab ride to the Rio. One word of warning though: do not attempt to walk from the Flamingo to the Rio. It looks way closer than it really is. Trust us on this one. Finally, if you’re willing to drop a few more bucks, the Wynn is all class. You really feel like you get what you pay for at the Wynn. Treat yourself by booking a room there if you’re running good at the cash tables or make a deep run in one of the donkaments. Good room rates and prices too at rawvegas.tv. Book it!