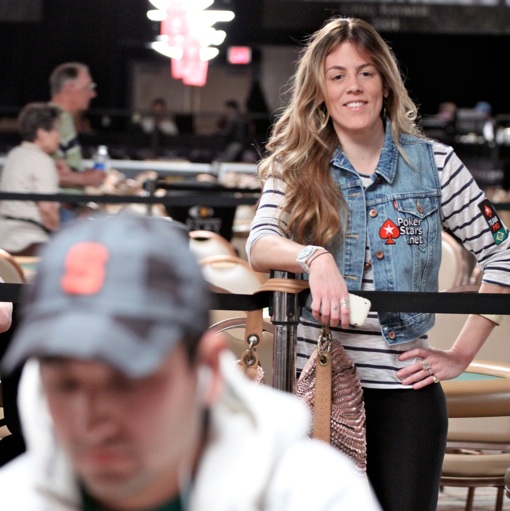 David Baker (left foreground) will come back a few shy of the money today in the $50,000 Player's Championship.

:: Event #2 ($50,000 Player’s Championship) – A strong showing for the Brothers Mizrachi in the $50,000 Player’s Championship. Michael “The Grinder” is the big stack going into Day 4 with 1,483,000. Robert is sixth overall with 1,032,000. A total of 21 remain, five short of the money. Yesterday’s chip leader, Kirk Morrison, ended the day seventeenth overall with 518,000. The early talk was that ESPN was considering filming the event once it got down to 18, depending on who was remaining at that point. But with the holy triumvirate out, and two of the bigger names remaining, Erik Seidel and Andy Bloch, among the short-stacks, doesn’t look like that’ll happen now. Get full chip counts here.

:: Event #3 ($1,000 NLH) – Around 2pm yesterday there was a brief meeting with Ty Stewart and members of the Player’s Advisory Council discussing how to handle the potential money bubble situation for Event #3 (read more about that here). The turn-out for the event was less than expected, and after playing down to 276 on Day 1A, there was a really chance that the money bubble could burst during Day 1B. Didn’t happen (almost did though), and a total of 481 return for Day 2 today with 441 getting paid. Full Day 1B chip counts here.

Get more 2010 WSOP updates from Pokerati, Tao of Poker , and Poker Road.