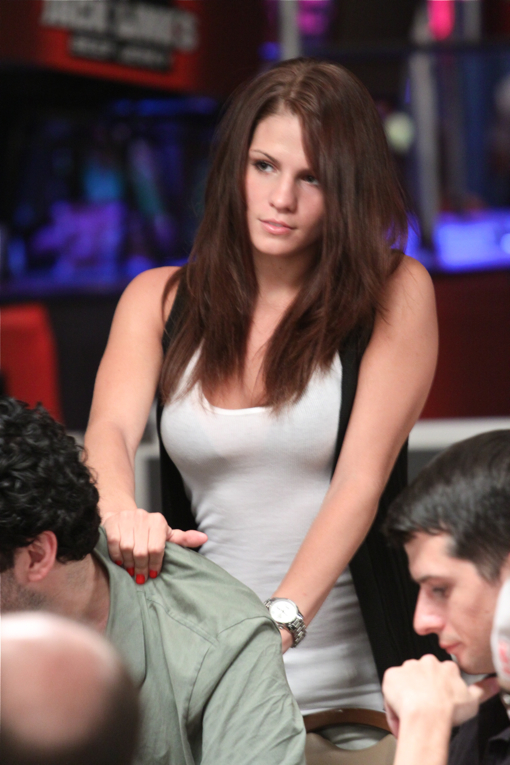 Well, we’re ready to officially bury The Year of the WomanTM. Not gonna happen. Even the Year of the ComebackTM isn’t a lock (or Year of the Hey It’s You AgainTM). Even though maybe one our yesterday’s winners would qualify as a Comeback/HIYA.

Big story today, of course, is Phil Hellmuth‘s pursuit of bracelet #12. That and the increasing quality of Girls on the Rail now. Exhibit A: Massage Girl (above and below). Solid. Get all 2010 WOSP Girls on the Rail here.

:: Event #36 ($1,000 NLH) – Seems like this one went on for fucking ever, but credit to 2008 November Niner Scott Montgomery for closing this one out. Comeback/HIYA qualifier? Feels like it. Montgomery defeated a field of 3,102 to bank $481,760 and his first bracelet. The win boosts Montgomery’s career tourney earning to over $4M. Get full final table payouts here.

:: Event #40 ($2,500 Razz) – For 47 straight years (BJ?) somebody has won at least two bracelets during the WSOP. While there had been some close calls this year, it hadn’t happened yet–until now! Having already won Event #15 ($10,000 7CS 8oB), Frank Kassela now adds a Razz title to his belt(?). In related news, Jennifer Harman, a woman, did not win this event. Nor did Vladimir Shchemelev, although he did make yet another final table. Get full payouts here.