Home   2011 Wicked Chops Awards: Girl on the Rail of the Year Goes To… 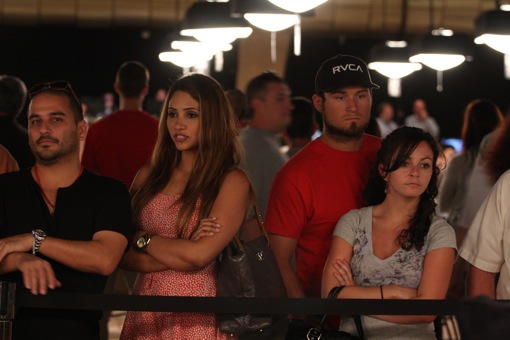 Above: The first time our lenses caught The Girl Chainsaw Tweeted About

So we headed over there. By the time we arrived, Allen “Chainsaw” Kessler was already eliminated, but we immediately figured out who he was talking about.

After we took the pics, we let Chainsaw know, to which he responded in typical Chainsaw-fashion:

@wickedchops did u get there in time she’s gone now. Hey, why aren’t u following me?

We put the pics up, and most immediately acknowledged she was the top girl we snapped all year.

Turns out that the The Girl Chainsaw Tweeted About–our runaway winner of our Girl on the Rail of the Year Award— was the daughter of eventual November Niner Badih Bounahra. Her name is Amal. She railed her dad pretty much every day during his run. And she might’ve had her entire home country of Belize vote for her.

When we opened polls, it was a fairly even contest between her, Jean Shorts Girl, Tatty Tats, and Xuan Liu. Then, about two days before we closed polling, Amal surged, captured about every vote, and closed with a ridiculous 84% of the tally.

So congratulations to The Girl Chainsaw Tweeted About. She joins the exalted air of previous Girl on the Rail of the Year winners Ass Girl and Rachel Nordtømme. Unlike those two though, we expect to see her again next year.