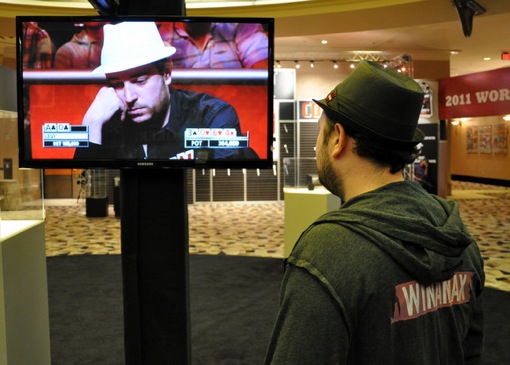 Sundays are always among the better World Series of Poker days. The glut of tournaments that go on over the weekend usually get down to producing some winners. Here is the latest 2011 WSOP results and action:

:: Event #4 ($5,000 NLH) – Final table action picked up short-handed, with only four remaining. Allen Bari held a monster chip lead, and rode it to an eventual title. Bari collected his first bracelet and $874,116. He defeated Maria Ho, a woman, who had most of the room pulling from her, heads-up for the title. This was Ho’s biggest tourney cash ever, banking $540,020. After the win, Bari went on about how great he is, which usually we like from people, but doesn’t play well here. Says Bari: “I was expecting to win a bracelet.  Seriously, I thought that if I did not win a bracelet it would like be a joke…I do not think my swagger is undeserved.  I’ve been playing poker a long time and have been working hard at it. I’ve been putting in the hours and learning. I am not arrogant in terms of everything.  Just poker, because – I’m really good at poker. I do not lie. I am just better than most people.  Everyone else thinks they are good, but they’re not. They all stink (laughing). I’m the best.” All right then. Read in full/get full results here.