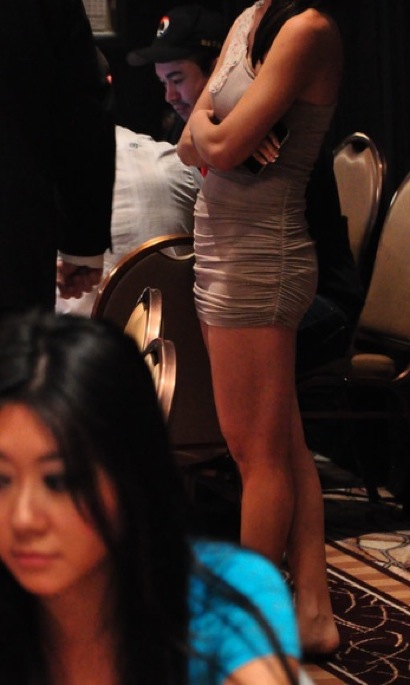 Maria Ho (left foreground) is looking to get an early leg up on the final table today, and ride her short-stack to a bracelet victory.

We’re nine events into the 2011 WSOP, and so far, no “Year of…” themes have developed. At least at the tables. Maybe Year of the Dramabomb? Let’s give it another week to figure it out. Here’s the latest…

:: Event #4 ($5,000 NLH) – Play was stopped with four remaining. Allen Bari has a commanding chip lead, stacked at 9,125,000. He’s followed by Sean LeFort with 1,420,000. So yeah, that’s a wide margin. But if we’ve learned anything the 2008 elections when a black man with the middle name of “Hussein” became President of this very United States of America, it’s that ANYTHING can happen. Seriously. That really happened? And then we voted for him too? And he found and killed Osama bin Laden? In related anything can happen news, Maria Ho, a woman, is short-stacked with 1,200,000. Let’s see if a hot Asian woman can win a freaking bracelet already.

:: Event #5 ($1,500 7CS) – Eugene Katchalov might qualify as the most under-the-radar great poker player out there. So it only seemed like a matter of time until he won his first bracelet. Judging by our headline, he accomplished that feat in Event #5. For the win, Katchalov banked $122,909. That pushes his career earnings over $6.3M. Eric Buchman finished third. Phil Ivey didn’t play this one. Get full results here.