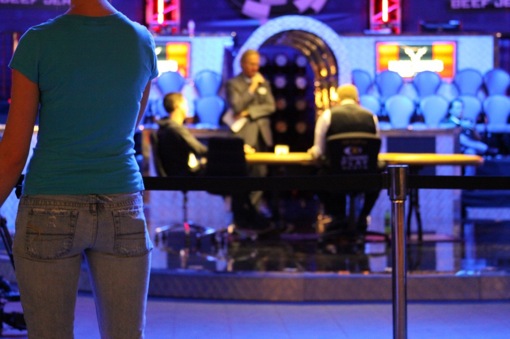 The 2011 WSOP has been short on big name final table buzz. Not so short on asses though.

No knock at all on anyone who has won a bracelet this year, but here are just a few small things we’d like to see happen to give the 2011 WSOP a jolt in the storyline department:

:: The man the myth, the legend, Black Phil Ivey, Big Sldick, the one and only Dwyte Pilgrim wins a bracelet – Pilgrim is one of the biggest, most entertaining personalities on the circuit. A deep Pilgrim run would get the Rio buzzing, and he makes for great TV/webstream.

:: A woman wins a bracelet – It’s been 27 years since a woman has won a bracelet at the WSOP in an open event*. Maria Ho, a woman, came close. It’s about time the fairer sex breaks through again.

:: Eugene Katchalov takes down another one – There’s been a multiple bracelet winner at the WSOP for the past 27 years*. Katchalov, arguably the best tournament player for the past two or so years, already took down his first bracelet this year. Another bracelet solidifies his status as “the” guy on the circuit today.

:: Phil Ivey plays the Main Event – This one will only happen if Tilt pays back its U.S. players by the Main Event, which means it probably won’t happen, and even if Tilt does pay back U.S. players, it still might not happen, but if it does happen, holy shit, it’ll cause a riot.

:: Event #13 ($1,500 NLH Shoot-Out) – A starting field of 1,440 played down to 160. Notable survivors include but are certainly not limited to Nam Le, Frank Kassela, Daniel Negreanu, Lex Veldhuis, Scott Seiver, and Jennifer Tilly. Get full survivors here.