Home   And Then There Were Three: 2011 WSOP ME Down to Lamb, Heinz, and Staszko 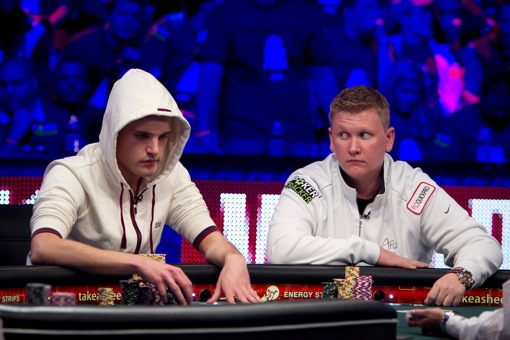 Pius Heinz, Ben Lamb, and that other guy will come back to compete for the 2011 WSOP Main Event title on Tuesday.

The 2011 WSOP Main Event final table played out like most episodes of The Walking Dead: really slow at first, then picking up with a bang at the end.

While Sunday’s final table didn’t match 2009’s ridiculousness of swings, bad beats, and storylines, the near-live feed on ESPN2 showcased a level of skill among the participants that’s likely been unmatched in previous years.

In the end, you can make the case that the three guys who played the best ultimately survived for Tuesday’s championship battle. Taking the chip lead when the final three return is German PIUS HEINZ with 107,800,000. He’s followed by U.S. American and reigning WSOP POY Ben Lamb with 55,400,000. And in third overall is the man who started play as chip leader, Martin Staszko, with 42,700,000.

Get 4-9 payouts after the jump. Get a full live blog recap from Dr. Pauly here.