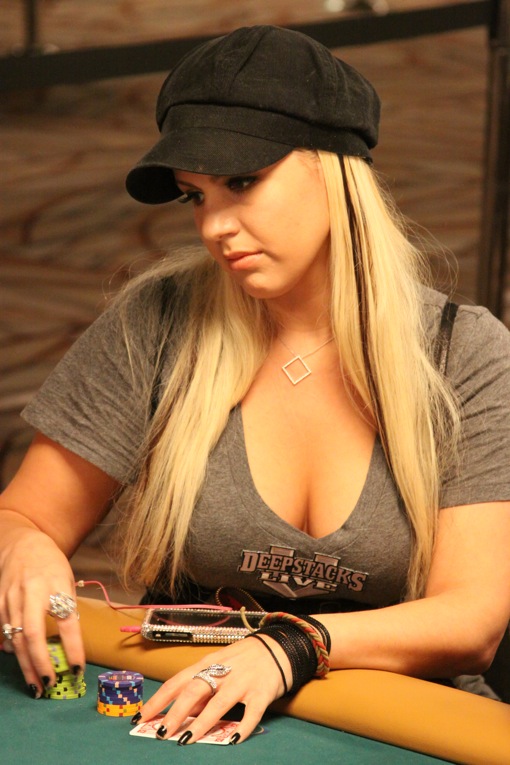 Jennifer Leigh busted out of the $2,500 Mixed Hold'em event early. But expect more shots like this from the Ladies Event today.

We’ve been saying all month how the 2011 WSOP isn’t the “Year of” anything. No overarching themes. At all.

Well, after yet another major bit of Full Tilt news (the company’s potential sale, more on this later) rocked the Rio, let’s just dub this the Year of the Full Tilt DramabombTM and move on.

The big leads today (aside from Tilt, of course) are how a guy named Lenny defeated one of the most talented final tables of the year to win his first bracelet, and how Vanessa Peng, a woman, on the day of the Ladies Event, looks to win an open event title.

Look for a bunch of Ladies Event photodumps this afternoon and evening as well.

:: Event #49 ($2,500 2-7 Lowball Limit) – One of the most talented final groups of the WSOP, two tables filled with young Internet hot shots, was won by the old guy who probably doesn’t have an email account. Lenny Martin, an old-school Russian-born Vegas gambler who was railed by the likes of Todd Brunson, Mike Matusow, Alexander Kravchenko, and Ralph Perry, took it down. After the win, Martin said that he’s “…waited 25 years for this!” which is crazy considering most of the final group participants aren’t even 25 yet. Martin banked $189,818 for his first bracelet. He defeated Justin Bonomo ($117,305) heads-up for the title. David Bach was third ($77,517) and Jason Mercier was sixth ($25,967). Get full results here.