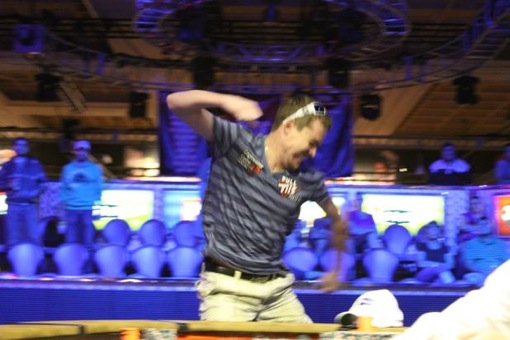 Hard to tell from this photo but Matthew Jarvis was excited about winning his first bracelet.

Another weekend of massive fields. Two bracelets were awarded. Here’s the latest.

:: Event #40 ($5,000 NLH Six-Handed) – Not overly suspenseful. November Niner Matthew Jarvis came into heads-up play with around a 3-to-1 chip advantage and had no problems closing it out. Jarvis banked a whopping $808,538 for the win, pushing his career earnings to over $2M. This is also Jarvis’ third circuit win since making the 2010WSOP ME final table. He defeated Justin Filtz ($499,855) heads-up for the title.

:: Event #41 ($1,500 Limit Shootout) – All eyes were on if Eugene Katchalov could close-out the final table and become the first person at this year’s WSOP to win two bracelets. Katchalov had the chip lead for awhile, but couldn’t make like Wilson Phillips and hold on, bowing out in fourth ($50,993). The event was won by 26 year-old Justin Pechie ($167,060) of Thompson, CT. Pechie was an online pro who had to force himself into the live ranks after The Events of 4/15TM. So far, so good for him. Get full chip counts here.