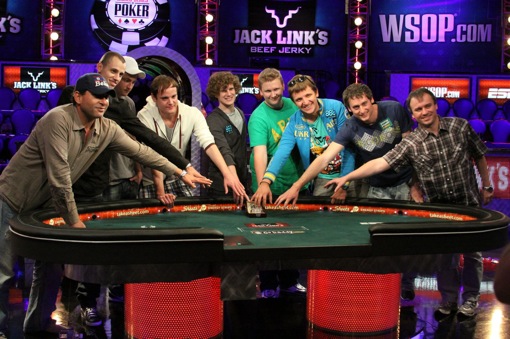 Who among the 2011 WSOP November Nine grabbed the Good for Poker title?

This year reminded us a lot of 2007 (minus Tobey Maguire acting like a douche). Coming down into the final 150, there were a lot of “name” pros and “big name” pros. But they started dropping like flies. And when the dust settled, we were left with this.

Within the industry, 2011’s final table is definitely better than 2007. But while the casual or mainstream fan may not know, well, anyone at this final table, it doesn’t mean that it’s a total disaster either.

Keep in mind, none of the below is a reflection of if somebody is a good guy or not. We base the Good, Bad, or Meh on whether or not we think the individuals will be a good ambassador for the game and has a hook or story that can cross-over to mass media and grow the game. In particular this year, given the legislative climate, we see the “can he demonstrate that poker is a game of skill” storyline being a key determining factor.

With that out of the way, here’s how we see it.

Ben Lamb – This was a snap call. Lamb is the current WSOP Player of the Year. He’s got loads of personalities. The pros respect his game. He’s got a good-looking girlfriend. He can pound alcoholic beverages. But most of all–at a time when from a regulatory, legislative, and general public perspective–he does great for the aforementioned “poker is a game of skill” argument.

Lamb seems like the guy everyone in the poker community can rally behind this year. The mainstream media can easily tell his story: Lamb gave up drinking as a prop bet during the summer and finally got hot and fulfilled his potential. Plus, the guy who was playing the best poker this WSOP made the final table of the Main Event. Makes sense. Easily packaged. Wrap it up. Tie a bow around it.

Eoghan O’Dea – Like Lamb, Eoghan O’Dea (pronounced Owen Odee) has a great story. His dad, Donnacha O’Dea, made two WSOP Main Event final tables (1983 and 1991). Like father, like son. Dad was good at poker, son is good at poker, poker is a game of skill. It runs in the family. The apple doesn’t fall far from the tree. Chip off the old block. Father-son metaphor.

Eoghan has been building up his poker resume over the past few years, with two $250k+ cashes to his credit. If he can keep his run-good going through the WSOP Europe, his star (and story) could rise in U.S. mainstream media as well.

Phil Collins – All cheap and easy Sussudio and In the Air Tonight jokes aside, Collins, like Lamb, is a well respected pro who is finally making his first major TV tournament splash. Like Lamb, Collins is well respected. He’s a sharp dude. He’s backed by Erick Lindgren, who has a history of picking great horses. He’s going to have a raucous crowd supporting him.

The argument/story Collins could sell which puts him in the “Good” category is this: here’s a young guy who made a career for himself playing online poker. He was successful online. It was his profession. Now he’s successful live. Poker is clearly a skill game as guys like Collins made playing online their profession.

No great story. No cross-over appeal. Would be like putting a turd on top of an ice cream sundae. Buzz-kill.

Badih Bounahra – Unless poker needs a boom in Belize, this isn’t moving the needle. Like Staszko, there isn’t cross-over mainstream appeal with him. He’s like a Belizian (?) version of Dan Nassif.

His daughter or girlfriend or wife is 100000% good for poker. Yep, she’s the Girl on the Rail that Chainsaw tweeted about. Every day, we were like, “no chance Chainsaw’s girl shows up again,” and sure enough, there she was. We couldn’t figure out who she was sweating, until the final day, when Badih (or “Bob”) got up from the featured table and went over to talk to her.

The moral of the story: just because something is bad doesn’t mean that you can’t find something good in it. Or hot girls are hot. Or the apple doesn’t fall far from the tree. Wait, that one doesn’t work here.

Anton Makievskyi – The 21 year-old from The UkraineTM doesn’t offer up much for the mainstream press. The “youngest to win the Main Event” storyline died when Peter Eastgate, then Joe Cada, took the distinction away from Phil Hellmuth.

Anton is probably a good kid. But he’d be a quickly forgotten about winner. Or better put, if he’s heads-up in November against Badih, nobody is tuning in, ratings plummet, and THAT becomes the new story.

Pius Heinz – PIUS HEINZ!!! Man, this guy is German. He’s been ornery with the media. Kind of a pain in the ass actually. Not that he’s obligated necessarily to fulfill all interview requests or the “you must be an ambassador” role, but he’s shown a lack of interest in doing so. We can respect a guy who just wants to grind and not deal with the ancillary things that come with poker success, but that guy isn’t going to grow the game or cross-over, so he falls into the “Bad” category.

Sam Holden – Holden seems like a good kid, and we appreciate the fact that he probably has more hair on his head than is needed. But this year, for the good of poker, the game needs a skilled winner from U.S. America (or Eoghan O’Dea). It is what it is.

Matt Giannetti – Here’s a guy that could move to the “Good” category, we just don’t know enough about his story yet.

Having said thatTM, typically cash game players or more reserved and camera-shy. It’s partly why they’re cash game players. He’s never had a live tourney cash over $65k, and with cash game earnings not something most people ever go on the record about, the public/media aren’t likely going to wave the “this guy is a pro!” banner with him, no matter how good he is.

Given his focus on cash games, we’d be surprised to see Giannetti embrace the mass media ambassador role. Maybe we’re wrong and he does. We hope so. Because we think that it’s going to be Giannetti who ends up winning the Main Event. That’s right, we’re calling our shot in July. Go to the Wynn and book that action now.

Agree or disagree with our assessments? Let us know in the comments section.