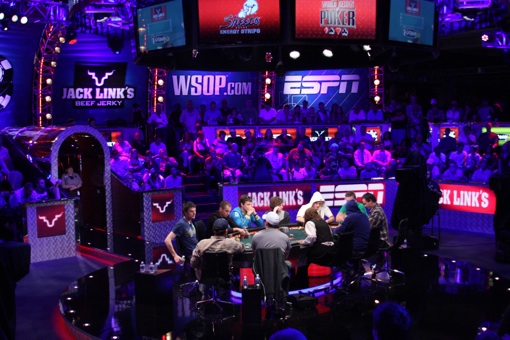 The 2011 WSOP November Nine is set. Only three Americans made it.

Martin Staszko from the Czech Republic is the chip leader with over 40M.

The top U.S. American in the field is a surging Matt Giannetti with 25M. After dinner break, Giannetti was short-stack, so he made a big climb. Phil Collins is in the air tonight in fourth with just under 24M. And Ben Lamb took a hit but ended stacked fifth overall with 20M.

In all, the Main Event final table only has 3 U.S. Americans, the least number, well, possibly ever (Nolan? Kevmath?).

Every member of the November Nine except for Badih “Bob” Bounahra are in their 20’s.

John Hewitt was the unfortunate bubble boy, getting KO’d in 10th.