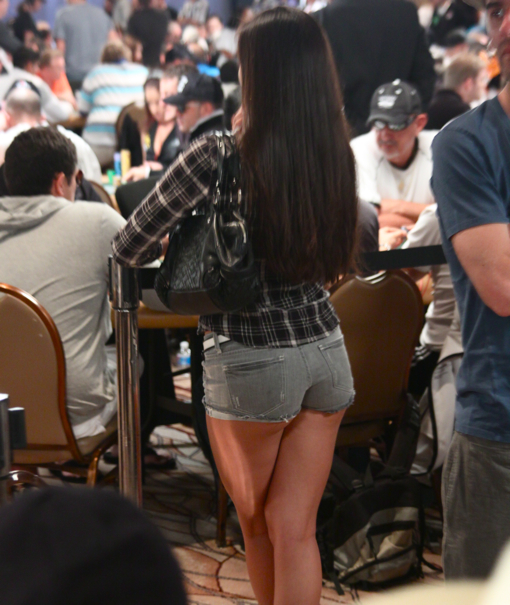 Will Ass Girl 2 (Electric Boogaloo) make a return to the rail at the 2011 WSOP when it kicks off on May 31? Or better yet, will we crown an Ass Girl 3?

The complete schedule for the 42nd annual World Series of Poker was officially announced today.

This year’s WSOP will feature 58 bracelet events (one more than last year), all held once again in the Pavilion and Amazon Rooms at the Rio. The series kicks off on Tuesday, May 31, 2011, with a new event – a $25,000 buy-in Heads-Up No Limit Hold’em Championship, restricted to 256 players.

The Main Event this year begins on Thursday, July 7, and plays down to the November Nine on Tuesday, July 19. For the fourth year in a row, the WSOP will hold the so-called “November Nine” hostage for four months before they play for the title on November 5-7, with “special primetime coverage from ESPN” on November 8.

World’s Longest-Running, Largest, and Most Prestigious Poker Tournament Set to Run From May 31 – July 19, 2011 at the Rio® All-Suite Hotel & Casino in Las Vegas

The annual poker extravaganza, which dates back to 1970, is televised exclusively on ESPN from the Rio All-Suite Hotel & Casino in Las Vegas.  The tournament series consists of a comprehensive slate of the game’s most popular poker variations running from May 31 – July 19.

A total of 58 coveted gold bracelets will be up for grabs in 2011 – one more than last year.

The opening weekend (June 4-5), features a $1,000 buy-in No-Limit Hold’em tournament, which in the past has drawn more than 6,000 entrants.  The event includes two starting flights – one each on Saturday and Sunday at 12 noon.  Day 2 for all surviving players will be Monday, June 6.

Throughout June the weekends will remain focused on the “weekend warriors” with affordable buy-in No Limit Hold’em tournaments for WSOP gold bracelets at $1,500 on Saturdays and $1,000 on Sundays.  July 2 and 3 will feature our only other multi-day start $1,000 tournament and we will conclude with one last No Limit Hold’em extravaganza on Tuesday, July 5 at 12 noon.

The 42nd annual WSOP will conclude with the grandest spectacle in all of gaming – the $10,000 No-Limit Hold’em Championship (aka “The Main Event”), which begins play Thursday, July 7 and will reach its final table (nine players) on Tuesday, July 19, at which time play will be halted.

The WSOP Main Event will feature four starting flights — one each day at 12 noon on July 7, July 8, July 9 and July 10.  The only way to guarantee your starting day is to pre-register for the event prior to the WSOP commencing.

The famed tournament’s culmination will be held with the play of the “November Nine®” from November 5-7, before a live audience with special primetime coverage from ESPN on Tuesday, November 8, 2011.

“Something for everyone is the best way to describe the 2011 World Series of Poker schedule,” said WSOP Tournament Director Jack Effel, who will oversee the event for the sixth consecutive year.  “It’s staggering to think that last year alone the WSOP hosted nine of the 17 largest tournaments in poker history.  We had 44 events produce more than a $1 million prize pool, so we can’t wait to get at it again and offer players at all levels the best poker action on the planet.”

The entire convention center of the Rio All-Suite Hotel and Casino once again will be exclusively dedicated to the 2011 World Series of Poker, with tournament tables in the 58,000 square foot Pavilion and the 38,000 square-foot Amazon Room.  The final number of tables in play is subject to regulatory approval, given just prior to the tournament commencing, but is expected to be similar to the 370 which were utilized in 2010.

Player comfort is also being addressed by new rules regulating the duration of daily play.  Excluding the Main Event, gold bracelet tournaments will begin at 12 noon and 5 PM Pacific Time each day, with a maximum of 10-one hour levels being played for the noon starts; the 5 PM events will be comprised of a maximum of eight one-hour levels on Day 1.   Day 1 play is expected to conclude at 12:45 AM for noon starts and 2:00 AM for the 5 PM starts.  For those advancing past the first day, re-starts for noon bracelet events will be at 2:30 PM, and 5 PM tournaments will restart at 3 PM, with a maximum of 10 levels being played each day until a champion is crowned.  The Main Event features two-hour levels, with play beginning at 12 noon each day.

Registration for all bracelet events will remain open through four levels of play – or until all available seats have been sold.   This is twice as long as previous years.  The only exception to this is the Main Event, which will remain open for it’s customary two levels (or four hours of play).

Pre-registration for the 2011 WSOP will be available on-site at the Main Cage of the Rio in Las Vegas and online through www.WSOP.com beginning February 7, 2011.

The 2011 WSOP marks the 42nd running of the game’s most prestigious annual tournament.   In 2010, the WSOP generated the most entries ever (72,966) from 117 different countries.  Players competed for more than $187 million as a total of 57 championship gold bracelets, globally recognized as the game’s top prize, were awarded.  Attendance in 2010 was up 20 percent year-over-year.

To view the entire schedule, visit WSOP.com/2011, where you will be able to download event structures, pre-registration forms or save the schedule to your calendar and even link it to your Facebook, Twitter or other social network sites.

Among the highlights of the 2011 schedule:

·        Hard Stop Times – The maximum a playing day will last is 10 levels each day, regardless of the number of players remaining.  This includes re-starts and final table days.  If we have not reached a winner or a final table after 10 levels of play, all remaining players left in the tournament will return at 3:00 PM to resume the tournament.  This will ensure tournament play each day concludes at approximately 3:00 AM for re-starts and allow a 12-hour break before play resumes.  Important:  This may cause some tournaments to exceed their scheduled three-day structure; however it will only affect the remaining players at that stage of the tournament.

All winners will be required to provide a valid picture ID.  Tax forms will be completed for those with winnings in excess of $5,000 net of event buy-in.  Players without a Tax Identification Number and foreign players from non-tax treaty countries are subject to up to 30 percent tax withholding.  WSOP reserves the right to cancel, change or modify the tournament or any tournament event, in part or in whole, without notice.

The World Series of Poker (WSOP) is the largest, richest and most prestigious gaming event in the world awarding millions of dollars in prize money and the prestigious gold bracelet, globally recognized as the sport’s top prize. Featuring a comprehensive slate of tournaments in every major poker variation, the WSOP is poker’s longest running tournament in the world, dating back to 1970.  In 2010, the event attracted 72,966 entrants from 117 different countries to the Rio All-Suite Hotel and Casino in Las Vegas and awarded over $187 million in prize money.  The WSOP in December, 2008 was named the 7th most admired sports brand in North America by the Turnkey Sports Survey, trailing only the older and more established NFL, MLB, NBA, NHL, NASCAR and PGA Tour among sports properties.  In addition, the WSOP has experienced groundbreaking alliances in broadcasting, digital media and corporate sponsorships, while successfully expanding the brand internationally with the advent in 2007 of the World Series of Poker EuropeSM. For more information on the World Series of Poker, please visit our website at www.WSOP.com.