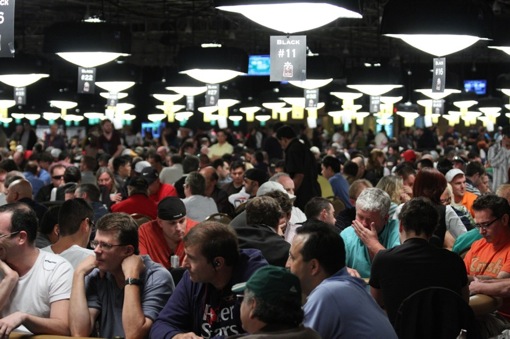 With record numbers and prize pools, the 2011 WSOP was a bigger winner this summer.

So with an unbelievably eventful six weeks, here’s our 2011 WSOP scorecard.

The WSOP – The 2011 WSOP exceeded all expectations, setting new attendance and prizepool (and revenue) records. From a coverage perspective, it’d still be better if all of the action was always condensed into one area, but with the field sizes and number of concurrent events going on, we get why the action needs to be spread out between two convention rooms. That’s a good problem to have. Whether or not this year was more of a “last hurrah” or if it’s a sign that live poker will totally survive the temporary absence of online play, well, you know who to ask about that.

Phil Ivey – The guy who didn’t play in one single WSOP event by some measures is the single biggest winner among players. After  Full Tilt management (specifically, Ray Bitar and Howard Lederer) turned down his White KnightTM deal, Ivey rampaged and sued the company. He eventually pulled the lawsuit as Full Tilt reengaged the White Knight group, but still, in the court of public opinion, Ivey clearly won the battle against Full Tilt.

Ben Lamb – Ok, if there was one player other than Phil Ivey who enhanced his rep 10-fold during the six week span of the WSOP it was Ben Lamb. Despite a 14th place finish in the 2009 WSOP ME, Lamb was virtually unknown to the casual poker audience. But he crushed event after event, eventually ending up in the November Nine, and becoming the guy the poker community will inevitably rally behind as the “pro who can win the Main Event.” He’s going to get the lion’s share of ink leading up to November.

Phil Hellmuth – Hellmuth achieved the impossible this year–he became a sympathetic figure. In his quest for bracelet #12, he finished second not once, not twice, but thrice. He handled his three seconds with humility, turning the tide of public perception in his favor. In seven years we’ve never seen featured table crowds overwhelmingly (or even underwhelmingly) rooting for the Poker Brat, but that’s what happened this year.

Epic Poker – They acquired the most under-the-radar successful poker property out there in the Heartland Poker Tour. They also acquired almost all available independent poker media to write and tweet good things about them. So despite picking a brand name that is pretty well summarized by this, they overall managed to come out +EV this summer.

Poker PROductions – Mori Eskandani and crew took over for 441 and, so far at least, did so with few hiccups. The featured table area–dubbed by the media as “The Mothership”–was aesthetically impressive. But more importantly, they pulled off making live poker on TV somewhat bearable. Yeah, there are still enhancements the broadcast should make (some of which we’ve covered before here), but the live shows were definitely a good sign of things to come in poker programming.

New Poker Media – We’ll be writing about this more over the next month, but we’re at a tipping point with poker media. It’s an out with the old and in with the new climate. Sites that either didn’t exist a year ago or didn’t have an audience–like QuadJacks and Subject:Poker— have carved out niches and suddenly become go to sources for news. And more and more hardcore poker people started to lean on Twitter for their tournament and breaking news updates. The times they are a changing.

Full Tilt Poker – Where to start? Phil Ivey sues them. Tilt management snaps back with a statement that sounded like it was written by an angry teenager. Alderney suspends their gaming license. Another group files a class action lawsuit against them. They still haven’t paid their U.S. players back. And their White Knight deal still isn’t done. Other than that, they’ve had a great summer.

Featured Table Players – With the DoJ online poker crackdown and new WSOP hat logo policies, players saw around a 90% drop in sponsorship dollars this year compared to last. For many mid-to-big-name pros, those dollars often were the difference between a profitable or losing overall WSOP. And for the average Joe who lucked his way into a Main Event featured table, those dollars often covered their buy-in (and then some). Next year may be worse, as we still won’t have legal real money gaming sites operating in the U.S. So this is a trend that may last a couple of more years.

Old Poker Media – To be expected, but it was a nasty, toxic atmosphere among poker media this year. With uncertainty about the future (at least in the U.S.), the claws (understandably) came out. It seemed like more fake Twitter account bashing (and general Twitter warring) occurred. The quality of Poker News’ tourney reporting got beat up by players and non-Poker News media alike. It seemed like almost everyone was slinging arrows. And upstart new poker media sites challenged (and in some cases) out hustled the old guard. All in all, the mood was a far cry from the past few years. Here’s hoping this one is a temporary thing.

Las Vegas Strippers and Models – Well, no more Pokerpalooza or Pokerfest or whatever the convention was called that’d take place during the first few days of the Main Event. So that meant no more dunk-a-stripper. Or pillow fights. Or just hot girls manning booths. Their loss is our loss too.