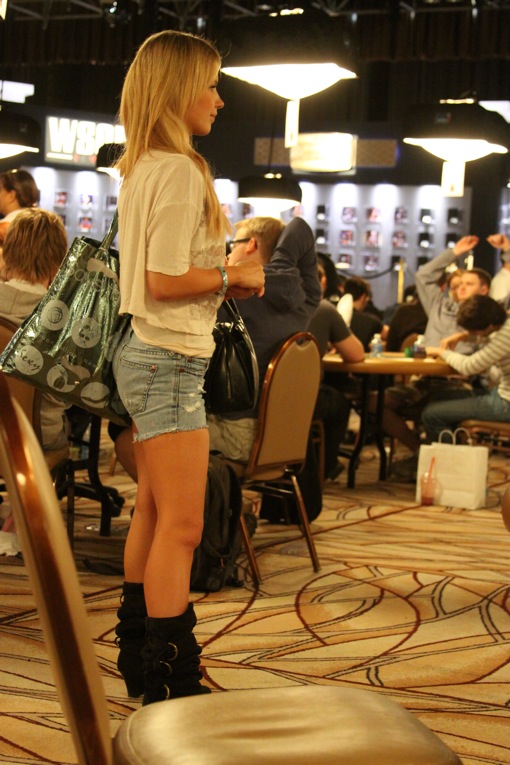 Everyone was watching to see if Tom 'durrrr' Dwan could capture his first WSOP bracelet. Except this girl.

Due to the 10-Level RuleTM, no bracelets were awarded yesterday. Most eyes were on Tom ‘durrrr’ Dwan as he challenged for another bracelet. Here’s the latest.

:: Event #36 ($2,500 NLH) – The man the myth the legend, Black Phil Ivey, Big Sldick, the one and only Dwyte Pilgrim went deep in another large field NLH event, but fell just short of the final table (and elusive first bracelet. Pilgrim bowed out in 15th ($33,294). Play was stopped with five remaining. Brit Thomas Middleton holds the chip lead. Get full chip counts here.

:: Event #37 ($10,000 H.O.R.S.E.) – This one was stopped with just two remaining. When play resumes, Fabrice Soulier, a frog, will come back with a massive chip lead (6,290,000) over Shawn Buchanan (910,000). Most of the attention during the event was on Tom ‘durrrr’ Dwan, who made another run at his first bracelet. While durrrr still has meaningful bracelet bets, a lot of those bets from last year involved Tilt equity, sooooooo…not as big of a payoff / decimation of the poker economy anymore. Regardless, durrrr is one of the few individual players that gets the Amazon Room buzzing when he makes a deep run. He banked $134,480 for his fifth place finish. Get full results here.