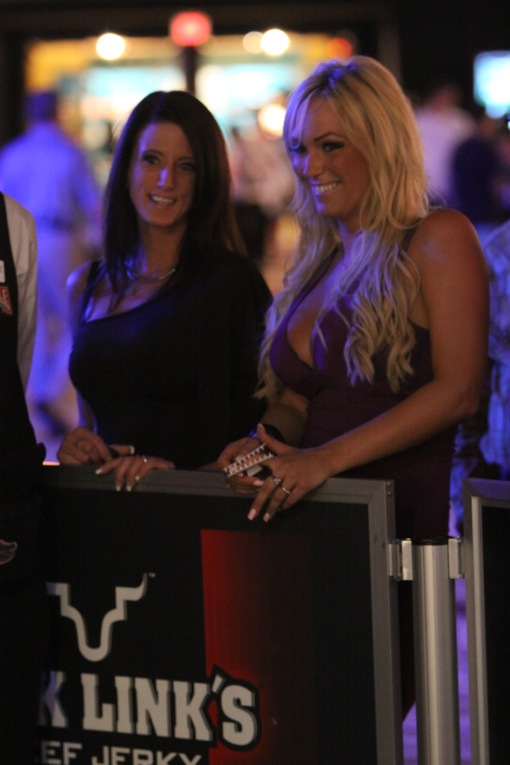 'Entities, your Falcon Henne jokes are STILL so funny...' these Girls on the Rail said to themselves.

Was looking like a potentially banner day at the 2011 WSOP on Thursday, but like Falcon Henne in a hot air balloon, some of those storylines just never came to be.

:: Event #27 ($10,000 Limit Hold’em) – This event waved goodbye to some interesting names with the likes of Daniel Negreanu, Maria Ho, Carlos Mortensen, Shannon Shorr, a woman, and Erick Lindgren all hitting the rail during the day. Negreanu was busted out in particularly brutal fashion when his boat was rivered by a straight flush to send him home in 26th. Among the 14 remaining players are BoostedJ, Barry Greenstein, Hoyt Corkins and Isaac Haxton, so there’s potential there but how much remains to be seen. Winner receives $378, 642. Full chip counts here.

:: Event #28 ($1,500 NLH) –  2,500 players started this thing out but only 349 of them made it through to Day 2 after the carnage that only a low buy-in event can create. Current chip leader is Rick Romine who built up a sizable chip lead over second-place James English while other, lesser mortals fell around him. Notables still remaining are not plentiful but do include Peter Feldman, David “The Dragon” Pham*, Matt Affleck, Andy Frankenburger and Amnon Filippi. Full chip counts here.

*Not a real dragon