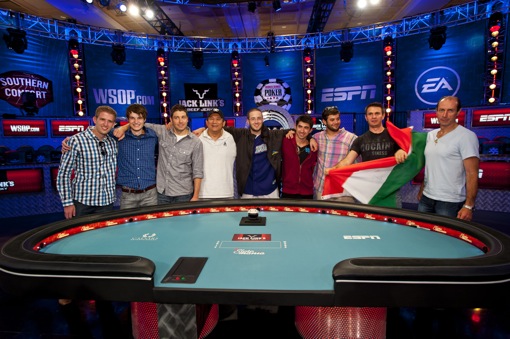 The 2012 WSOP Main Event has its Octo-NineTM.

The final table may be the least star-studded since 2008. That could’ve changed had both of the women who went deep, Gaelle Baumann, a woman, and Elisabeth Hille, a woman, hung on to make it. Both ended up with the deepest runs (and biggest cashes) a woman has ever scored in the Main Event.

That leaves us with a womanless, mostly American final table.

The two biggest “pro” names to make the Octo-Nine are Andras Koroknai and Greg Merson, who are stacked second and third, respectively. Koroknai, a 30 year-old from Hungary, has 29,375,000. He won the 2010 WPT LA Poker Classic for over $1.7M. Koroknai is the only foreign-born player in the field.

Bringing up the rear as short-stack is Jacob Balsiger, a 21 year-old college senior from ASU. Stacked at 13,115,000, if he were to win, he’d eclipse Joe Cada as the youngest all-time Main Event champ.