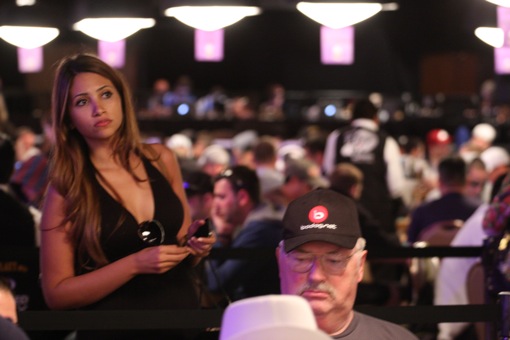 Girls on the Rail is expected to be a focal point of conversation on today's WSOP media call.

10:32am – Seth Palansky intros and passes the mic to Ty Stewart. Disappointed that Ty did not begin the call self-anointing himself as Commissioner.

10:33am – Ty says that they’re “not gloating.” Translation: they’re gloating.

10:34am – Ty says that “poker is here to stay.” Also here to stay: The Internet, phrases like “ridic” “obv” and “kewl,” and apparently skinny jeans.

10:38am – Jack Effel is in the house. He begins his statement by singing that he’s this.

10:42am – Effel running down the new tournaments and events. They’ve also added 90 new tables for side events and tournaments. WSOP/Rio trying to keep as much action in-house as they can (and away from Venetian, Bellagio, etc.) Good for players, good for bottomline. WSOP always finding ways to make some cash.

10:45am – Effel says there will be more table talk allowed. You can say anything you want regarding the contents of your hand so long as you don’t expose your hand. They want people to loosen up more. And there is some loosening up of the excessive celebration rule as well. Hopefully this doesn’t lead to the reemergence of one Barry Paskins. Actually, hopefully it does.

11:02am – Only the final table will have live streaming. The Tuesday night ratings of the pre-packaged shows took a hit, so the move should help boost those ratings again (as those shows last year we’re essentially an edited re-air). But every hand of the final table will be broadcast.

As long as it’s not, “Terrorists underwear bomb Amazon Room” we’re pretty much OK with anything else.

11:09am – No formal plans to honor Amarillo Slim. See if that sticks.

11:20am – WSOP expects the $1M buy-in to reach its 48-person cap. That’ll be a massive first place prize. They’ve already received deposits (though not full amount) for many players.

11:24am – In the clear! WSOP.com does not stand for Wicked Series of Poker. Whew.

11:25am – Love that Kevmath’s phone buzzer keeps going off. The buzzes you hear is poker information and data being directly transferred into the computer database embedded in his brain.

And that’s a wrap…less than a month till the start of the WSOP. Appropriately, the call ended with Ty singing this. For real.