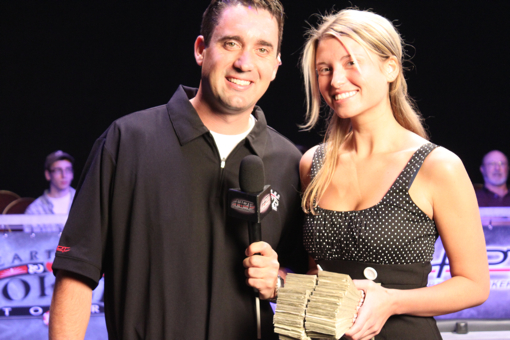 Cherish Andrews (girl on right) is chip leader of Event #31.

A few bracelet events wrapped on Friday and Saturday, and some big names are in contention for bracelets today. Here’s the latest from around the 2012 WSOP.

:: Event #27 ($1,500 H.O.R.S.E) – You all remember Ylon Schwartz, right? Schwartz was a member of the first November NineTM back in 2008 (the year Peter Eastgate won). New York Jewish guy who was a ranked chess player. Fro. Ok you got it. Since that November Nine run, Schwartz has strung together some respectable cashes, including a few WSOP final tables. But he’s never captured that elusive bracelet…until now. Schwartz outlasted a tough final table to win the $1,500 H.O.R.S.E. table to capture his first bracelet and bank $267,081. He defeated David “Chewbacca” Chiu ($164,960) heads-up for the title. What a wookie. Get full results here.

:: Event #31 ($1,500 NLH) – A total of 2,811 entered the latest weekend warrior event. Cherish Andrews, who happens to be the winner of our HPT hostess contest from two years ago, is the overnight chip leader. Get full stacks here.