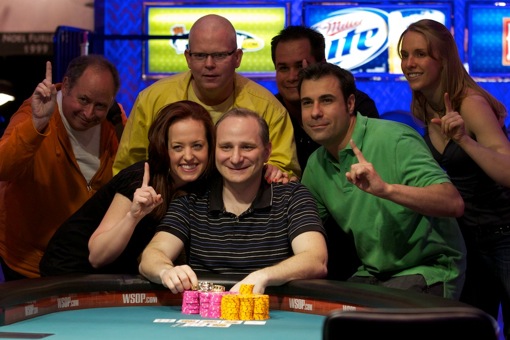 What are all of Andy Bloch's friends and family pointing up at?

Last week, in our Five Things to Expect at the 2012 WSOP post, we possibly wrote that this would not be the Year of the Pro. Let’s just pretend we didn’t write that. Yeah, we are right about a lot, like last year when we repeatedly said Epic Poker would fail or that the Internet is in fact here to stay, but we’re looking pretty off on this one. Anyway, here’s the latest.

:: Event #7 ($1,500 Seven Card Stud) – In a “pro heavy” final table, Andy Bloch finally ditched the mostly undeserved “bridesmaid” moniker he’s been carrying for years, as he pulled through and won his first bracelet. Bloch earns $126,363, and more importantly, can tell everyone to shut the fuck up about finishing second three times over the course of one year between 2007-08. Bloch defeated Barry Greenstein ($78,038) heads-up for the title. David Williams finished fourth ($36,470) and Caroline Hermesh, a woman, finished seventh ($15,135). Get Bloch’s winner’s profile here. Get full results here.