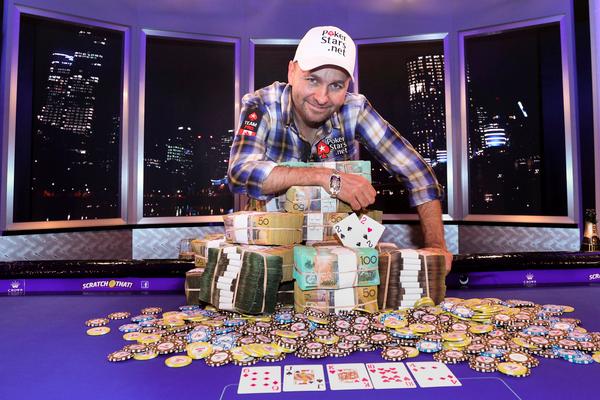 We’ve been giving out the Wicked Chops Player of the Year since 2010 (Vanessa Selbst was our inaugural winner). We usually put a lot of thought into it, trying to figure out who deserves it based on our Wicked Chopsian criteria (for a refresher from 2010, it’s based on: overall results, overall impact on the game, sponsorship appeal, and the amorphous “more.”).

This year was the easiest selection we’ve ever had. The WCP POY is Daniel Negreanu.

The best in any game usually rise to the top when it matters most. Daniel is partly Daniel because he had a monster 2004 during the height of the boom. He did it again this year as legalization was legitimizing poker for the masses. Tiger, , Montana, Jordan all had an impeccable sense of timing and seizing the big moments. Add Negreanu to that list.

We’ve written many times over the years that Daniel is one of a select, maybe less than a handful of poker pros who truly “gets it” when it comes to managing his brand–and what it could mean for the game. Hellmuth gets it. Antonio gets it. Negreanu gets it. Aaaaand that’s about it. If more poker players emulated those three, there would be more sponsorship money to go around for all. Instead, you have a bunch of Durrrrs getting booted from Tilt. End rant.

On to the year at hand–Daniel won the GPI, BLUFF and Card Player Player of the Year awards. He took in over $3M in live tourney earnings (including two $1M+ cashes) and scored 2 WSOP bracelets (giving him 6, moving him into a tie for 9th all-time along with TJ Cloutier, Jay Heimowitz, and, and… what the fuck really Layne Flack? And Layne Flack).

He also raised over $170k for St. Jude’s children’s hospital, made a number of “empowering” videos for others, continued to be among the best pro bloggers and tweeters out there, and would’ve cured polio if not for that uppity Jonas Salk.

It’s amazing what Daniel can accomplish when he sets his mind to a goal. He really rededicated himself this year and the results speak for themselves.

We are incredibly grateful to Daniel for what he did for our players. He gave them a lot of value for their buy-in and the opportunity to play better poker with a quality structure.

And there you have it. The least difficult Player of the Year award we’ll ever give.