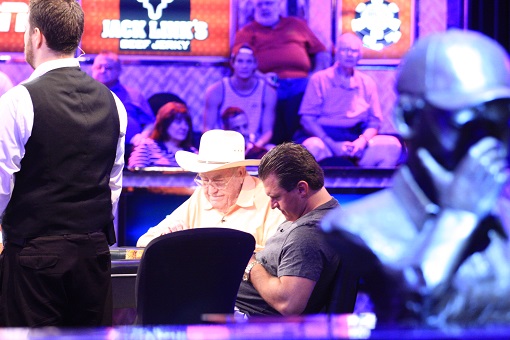 The money bubble burst early during Day 4 at the 2013 WSOP Main Event. The carnage of bustouts from that point on was unprecedented in the 8 Main Events that we’ve covered. How fast and furiousTM was the action? Said Merch:

Whooo doggie. I haven’t seen that much bloodshed since the Battle of Shiloh during the American Civil War. While I wasn’t alive for the original battle, my pappy’s great great grandpappy was, and we reenact it every year on the final day of the Hardin County Fair, which the locals have come to dub as “Secession Sunday.” The Yankees won that battle, but on an occasion, we revise history like it was a Tarantino movie and have us Johnny Rebs pull it out. But I tells ya, that battle saw us reenactment soldiers drop like flies. I haven’t seen so many flies drop since I bought my Insectalite 30 Watt bug zapper during the Horse Fly Invasion of 1997. Now enough with the jibber jabber, show me some titties.

Unfortunately for Merch and our readers, Day 4 marked the end notable Girls on the Rail. It also marked the end of Doyle Brunson‘s Main Event run. Brunson bust in 409th place, earning $28,063.

Along with Brunson, many good storylines and personalities had a Battle of Shiloh fate as well. According to BLUFF, whose math math math skills far exceed our, there was a bustout every 1 minute and 20 seconds after the bubble burst. Some notables who hit the payout cages included the insufferably annoying Humberto Brenes, Michael Mizrachi, Mark Kroon, James Bord, Jake Cody Ivan Demidov, and Matt Affleck. The most upsetting busts were Matt Marifioti and Lauren Kling, who we were really, really rooting for a featured table pairing and…dare we say…a reconciliation?