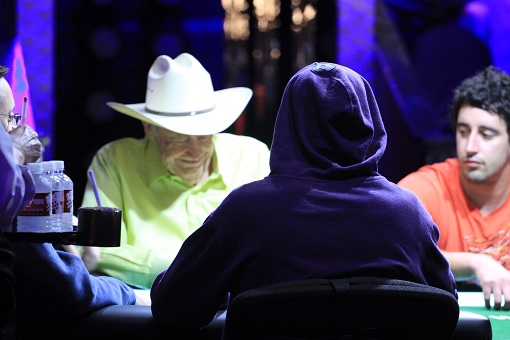 It’s all smiles for Doyle Brunson, who survived another day.

That puts the total starting field so far at 2,885, which means we’re currently off pace from last year’s Main Event numbers. If you’re keeping score at home, last year’s Day 1C drew 3,418. However, WSOP officials expect today’s Day 1C to draw an even bigger number than last year. How big? We asked Merch for how big today’s field could get:

Surely you remember Randy Wickersham’s prize winning pumpkin at the 1998 Loudon County Fall Fair, right? You don’t!? Well, it was so big we needed to borrow seven wheelbarrows from the Fisher family of Roane county just to get it to the fair! When we wheeled that sucker in, the whole county stood still and gawked, like the time when Nancy Pendleton, who has one leg, one arm, and four teeth, finished the potato sack race at the Wallabee family reunion. She wasn’t even a member of the Wallabee family, but ol’ Nancy, you couldn’t keep her from a potato sack race. She sniffed them out from three counties away. It got so bad we needed to spray the potato sacks with Lavender scented Fabreeze just so she couldn’t sniff out those sacks. She had the nose of a hound dog and the face of an Alewife fish, big ol’ bug-eyed limbless Nancy.

So can the 2013 WSOP Main Event break last year’s numbers? Will it? You know the answer to that.

Day 1B chip leader is Clement Tripodi, stacked at 207,050. Clement, a dapper looking gent, is from France, which means he sucks. Kidding, Benjo, kidding. He has one career cash to his name.

Also making their way through the field were past Main Event champs Doyle Brunson (81,025) and Chris Moneymaker (24,950). Moneymaker was severely short-stacked at one point but rebounded nicely.