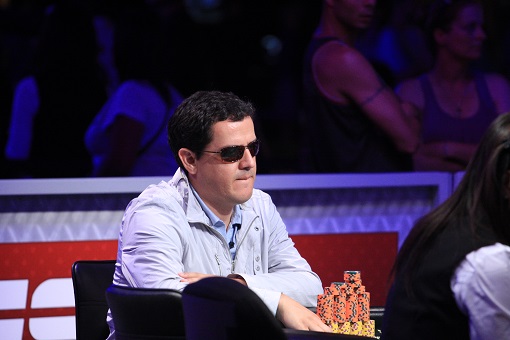 Carlos Mortensen has his sights set on another Main Event title.

Leading the way after Day 5 is Sami Rustom with 7,005,000. Rustom you may recall from nothing previously. He’s from Diamond Bar, CA and has just over $43,000 in lifetime tournament earnings. Rustom is follow by Marc McLaughlin with 6,695,000. McLaughlin isn’t that well known, but he does have three top 100 Main Event finishes in the past five years.

Jackie Glazier, a woman, wins this year’s Last Woman Standing CupTM. Glazier told BLUFF that, “Being the last Australian (means more) as far as my home country. I think I’d rather I had more than one female going to the final table.” She continued by showcasing Australia’s clear morally casual attitude by saying, “That would have been great, I’m not greedy. I can share.” Glazier starts the day 4,045,000, good for 12th overall. What does Merch make of Glazier as this years Last Woman Standing? Glad you asked:

Growing up, my three favorite movies in no particular order were Deliverance, Young Einstein, and Crocodile Dundee. Turned out that two of them movies were Australian. In particular I became quite a fan of Yahoo Serious, who wrote and starred in Young Einstein. I imagine I’m not alone here. Me and my friends talked in Australian accents all summer, saying stuff like, ‘Put a muskrat on the barbie’ and ‘I believe the opossum ate your baby.’ So seeing Jackie Glazier win Last Woman Standing reminds me of yonder years, especially flipping through Old Man Jenkins’ secret stash of dirty mags and the titties part.

Carlos Mortensen is the last former Main Event champ in the field. The 2001 winner climbed up the leaderboard after starting the day among the short-stacks. He ended Day 5 as the 35th biggest stack at 2,665,000.