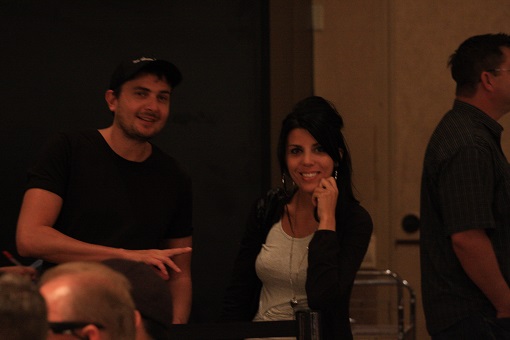 Marcel Luske (left foreground) awww eff it appears as if they’re on to us.

We’re going to lead with the positive.

The 2013 WSOP has been an overwhelming success. Attendance overall is up. The mood/buzz is back. Happy days are here again.

For those keeping score at home, this is the lowest attendance since 2005, when “Salty” Joe Hachem won.

Still, all in all, hard to complain. Not a huge drop in numbers, and overall the WSOP is thriving.

In other news, look for our Wicked Chops and Ole G Smith Mega Podcast tomorrow morning. First batch features Ty Stewart, Morgan Machina, and Andy Black. We have Tom Schneider and Danielle Andersen lined up for tomorrow as well.

Also, more Girls on the Rail for you in the below gallery. As Merch would say about a few of these girls, “Did you see the gams on that one? Her legs would look like a Toaster Strudel after I was finished with them. What? Why did you just cringe? Was that one too far?”

And if you missed Ass Girl 3, go here.