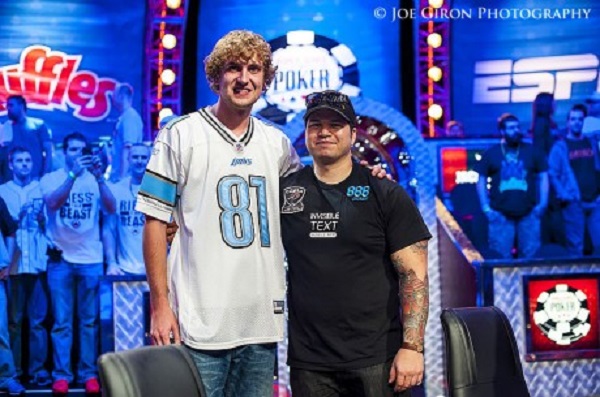 Defeating a table full of pros was a tall order for Jay Farber, but he’s the big stack going into heads-up play.

First of all, across the board, from the play to the broadcasting, everything associated with the 2013 WSOP Main Event was top notch on Monday.

Special recognition to Antonio Esfandiari and Greg Merson for crushing their broadcasting analysis.

Now to the play…

Our rank amateur, Las Vegas club promoter Jay Farber, 28, will play Circuit grinder Ryan Riess, 25, heads-up for the 2013 WSOP Main Event title. Pro vs. amateur. Tall vs. short. Tattoos vs. no regrets in 30 years. Target hoodie vs TapOut t-shirt. Michigan State Spartans vs. Trojans in the champagne room. Middle America vs. Middle finger to anyone who doesn’t get bottle service. Landscaping vs Manscaping. You get it.

Nothing against Riess, who has played fantastic and has the best nickname of the batch, but we’re pulling for Farber. He’s a genuine amateur. He’s a relate-able figure to a key growth demographic that would be more likely to read MAXIM than 2+2 (i.e. his appeal is much more broad). He’d enjoy the spotlight. He was the only player at the final table who had a chance of potentially getting new people interested in the game. These are good things.

Get a full recap of final table play at BLUFF here.