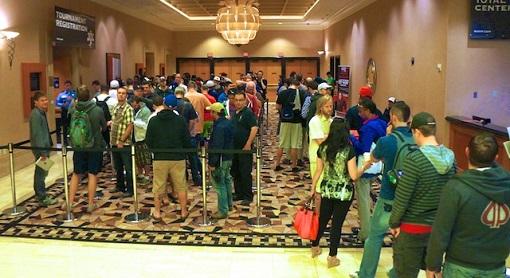 The Millionaire Maker set records at the 2013 WSOP.

Amazing what a little bit of branding and marketing can do to generate some buzz and create excitement for an event.

The first weekend of the 2013 WSOP brought us the Millionaire MakerTM, a $1,500 NLH tournament guaranteeing a $1M first place prize. The tournament delivered. A total of 6,343 entered, making this the largest non-Main Event live field.

:: Event #5 ($2,500 Omaha/7CS 8oB) – A total of 19 remain in this one. Still alive, although among the short-stacks, are Daniel Negreamu, Julie “Stack Em to the Top” Schneider, Mike Matusow, and David “Bakes” Baker. Get full chip counts here.