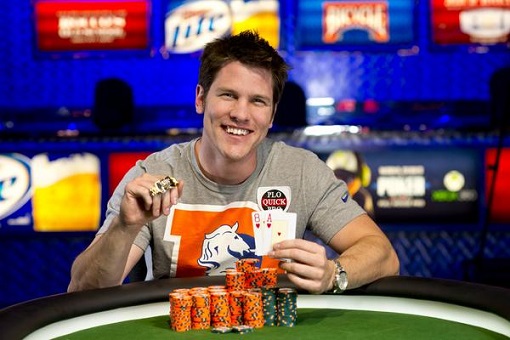 This guy won a bracelet.

Listen, the Entities are not ones to piss in anyone’s corn flakes.*

By all measures, the 2013 WSOP has been a massive success so far. Big fields. Good attitudes. Back to normal.

Even we were going to be a Chainsawy-nit about anything though, it’s that we haven’t had any buzz-worthy winners yet.

It’s early. We know. That can quickly change. We’re aware. It could even change…dare we say…today?

:: Event #6 (The MILLIONAIRE MAKERTM) – Benny Chen of Canada (does Prince Edward count as the not really Canada French Canada part of the country? Can we get a ruling on this? Lance? Gavin?) leads the final table. Bracelet winner Dan Kelly is second overall. Friends and familyTM after that. First earns nearly $1.2M. Get full final table chip counts here.

* Shit in them though, yes, that’s definitely on the table.